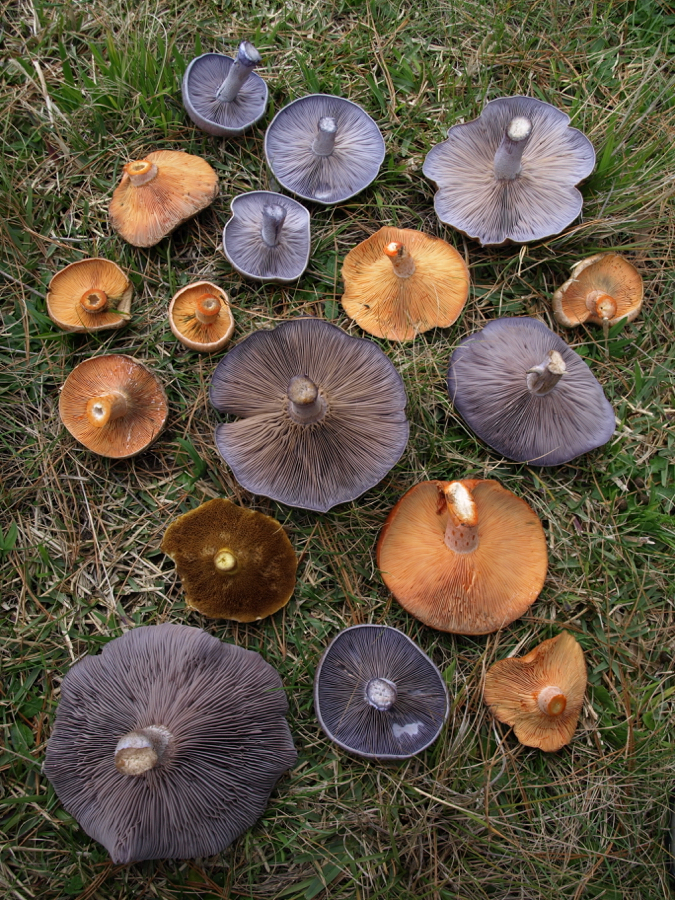 I thought we’d well and truly missed mushroom season this year. For pine mushrooms (saffron milk caps) it’s autumn, and now it’s July and we’ve only just managed to rustle ourselves out the door and in the car and down to my dad’s place in South-West Victoria, where we have a secret mushroom spot nearby. We found it about five years ago and going back has been a highlight every year since. I jump out of the car and skip around like a schoolkid, way too excited. My husband is the stealth hunter and gets straight to business, finding and cutting the best and most beautiful specimens over the hills.

The first year we had no idea what we were doing and jammed our massive harvest into a few calico bags, only to get home and realise that with all the mushrooms stacked on top of each other, so much dirt had fallen into the gills, and every meal was crunchy. Now we’re much cleverer and lay them out flat on trays or in wide boxes, almost dirt free. At times like this, with mushroom boxes laid all over our luggage, plus props and food for a photo shoot with Katherine and Leah for the new Hungry Girls Cookbook Volume 3 (due out before Christmas), my husband likes to refer to our car as the ‘Subaru Pantry’.

Pine mushrooms are the gorgeous orange ones that you see at a select few market stalls in autumn. When you cut or bruise them, the area goes blueish green, which has people like my dad running a mile! (While he likes to come pine mushrooming, he hasn’t tasted one yet.) In the beginning the mushrooms were new to me too, and although I was convinced I’d identified them correctly, something in my heart still jumped whenever I served them up – a scary feeling that I could actually poison people. Thankfully I never did.

This year we’ve made another discovery – wood blewits. They’re purple! In eggplant and cabbage this is okay, but in mushrooms I have to say it does look a bit crazy.

Wood blewit season seems to be a little later than pine mushroom season, running into winter. While pine mushrooms sprawl out from the pine trees (and are mostly finished by July), wood blewits lurk directly beneath, hiding in the long grass like mauve goblins. We took a whiff of our find and the smell was good – and one loose rule of thumb is that if mushrooms smell good, they are most likely edible. We thought we had seen them before in The Complete Mushroom Book by Antonio Carluccio, so we picked a trayful and waited until we got home to double check.

Pine mushrooms have a fairly classic mushroom smell – rich and old socks-y – while the smell of wood blewits is bright, fruity and aniseedy. When you cook them, pine mushrooms are actually mild and have a firm, dryish texture, whereas wood blewits go silky and slippery like other mushrooms and their flavour is more mushroomy. According to Antonio, you can’t eat wood blewits raw because of toxins they have, but these disappear when cooked.

Each year after our mushrooming trip, I make this very simple soup without stock or cream or other common culprits. It’s chunky, deeply flavoured and satisfying, but not too overpowering. Carrot and celery are added to soften and sweeten the mushrooms, rendering the soup like a silky Bolognese. You can add herbs such as sage or parsley if you wish, although I quite like it pared right back.

Heat the oil and butter in a saucepan and add the onion, garlic, carrot and celery. Sauté for around 10 minutes, stirring every so often. Meanwhile, clean the mushrooms (if they are wild mushrooms and there is a little dirt, wash the tops of the mushrooms under running water, and brush any dirt from the gill side with a pastry brush). Roughly chop the mushrooms and add them to the pan, sautéing with the vegetables for another few minutes. Pour in enough water to submerge the vegetables and add the salt and some pepper. Simmer for 20 minutes or so, adding more water towards the end if it seems to be getting low. Blend the soup to a chunky puree with a stick blender and taste for seasoning. Serve with dollops of yoghurt or sour cream, or just as it is.