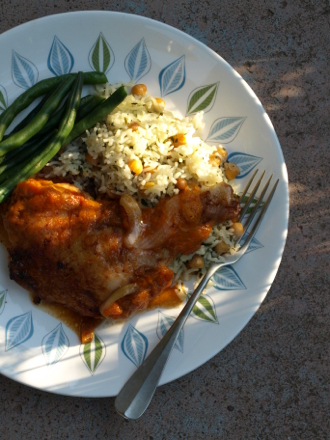 Apricots suck me in every time. Fragrant, nectary, juicy, hand-picked from a tree – well of course – but even those not completely ripe, less than fragrant apricots that you get from most greengrocers. I buy them even when my gut feeling tells me they’re not fantastic. (I don’t usually do this with other things!) A suggestion of an apricot is still worth it for me. I am an apricot nutter.

Their season is so short. Peach season is amazingly long in comparison; apricot season is really one month, at best two. Right now it’s getting towards the end of the season and I generally start thinking about stockpiling if I haven’t already. At least a few containers of stewed apricots in the freezer is essential. Yoghurt and muesli with a luscious slurry of apricots in one corner feels like a small miracle in winter.

This chicken dish is a celebration of apricot season and also a nod to that old Australian classic of apricot chicken made with apricot nectar. It actually started out with a recipe I found in a quirky 1970s book called Country Cookery (Recipes of Many Lands) by Coralie Castle and Margaret Gin. Chicken roasted with apricots (Djedjad) had me in immediately, especially with honey, rosewater and black pepper to flavour it. The recipe is in the Turkish section, so for years I’ve been thinking of it as Turkish and serving it with a chickpea pilaf … Now I’ve done a search for ‘djedjad’ and I think it’s actually Moroccan! Ah well. It’s become a thing in our house and the pilaf is here to stay because it goes with it so nicely.

I’ve been tweaking the chicken and apricots over the years and it has arrived at this point. There are notes of cinnamon, plus a little ginger and chilli warmth, and a very subtle addition of rosewater at the end. Serve this with a green salad of some description, or even just some green beans. 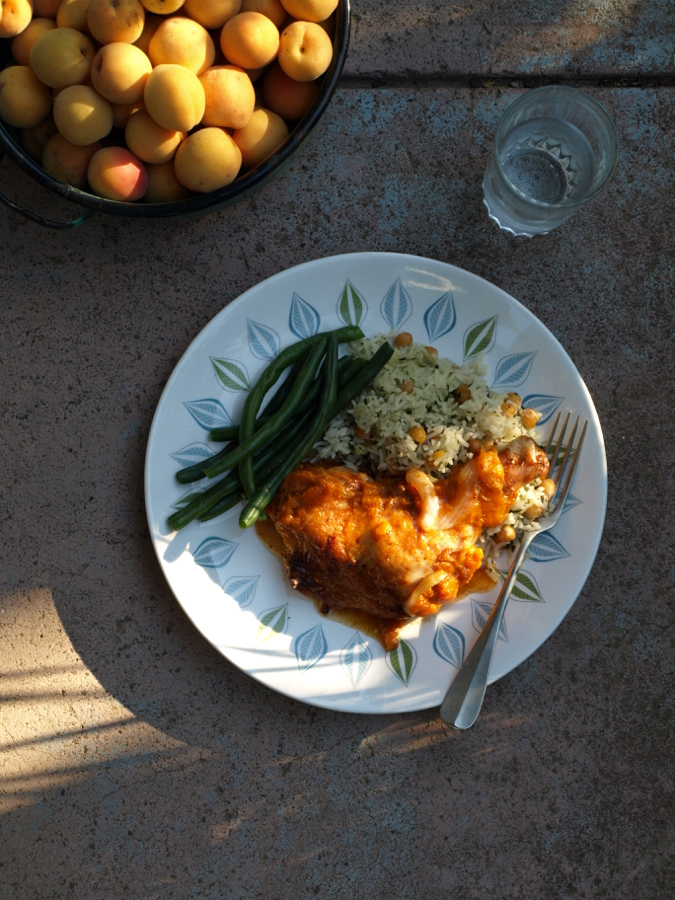 Preheat the oven to 200°C. Put the chicken on a large roasting tray and sprinkle with the salt and pepper. Squeeze over the juice of half the lemon and add a splash of oil. Rub the mixture into the skin of the chicken all over. Place the chicken breast-side down on the tray.

To make the pilaf, heat the butter and oil in a saucepan and fry the onion and cinnamon stick until the onion is golden. Add the rice and salt and fry, stirring almost constantly, until lightly golden. Add the chickpeas and parsley and enough water to come about 2 cm over the rice. Bring to the boil, then reduce the heat to low and cook for about 15 minutes, or until all the water is absorbed. Leave to stand for 5 minutes (or more) before serving.

When the chicken has finished cooking, it should be golden and crisp (you can pull out a leg to check that the juices run clear if you’re not completely sure it’s cooked). The apricots should be soft and reduced. Squeeze the remaining half lemon over the apricots and drizzle with the rosewater, stirring in gently. Serve with the pilaf.