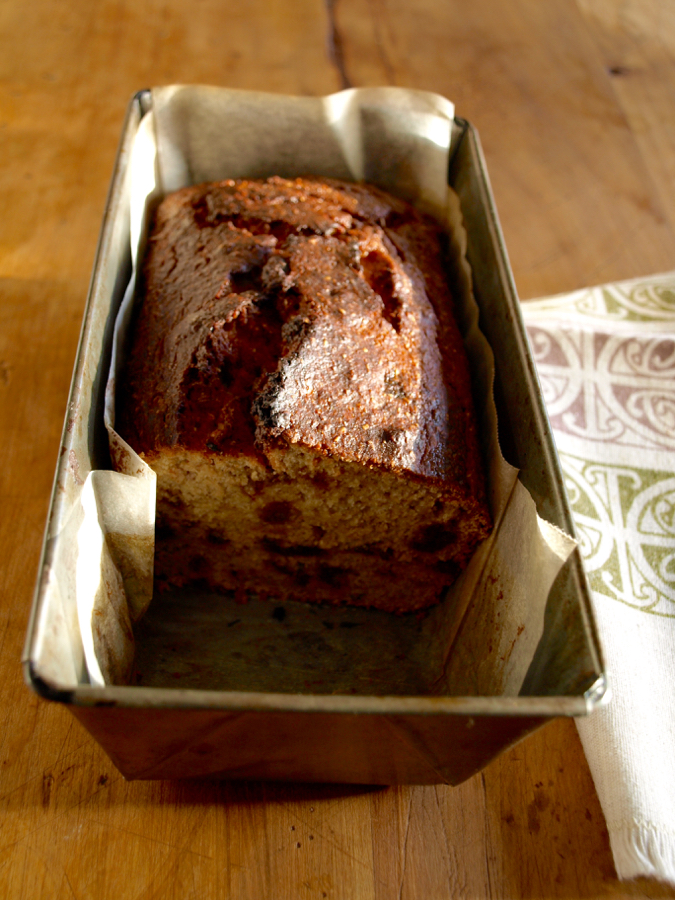 I have read that Italians sometimes eat cake for breakfast – perhaps with a milky coffee made with espresso leftover from the night before. They don’t do dessert after a meal, but sweet snacks and a decadent breakfast seem okay? (As for coffee – after midday it’s strictly without milk.)

Doesn’t this sound romantic and carefree? But I just can’t bring myself to do it. In our house we try to set ourselves up with something sustaining, usually featuring oats or wholemeal bread, or sometimes eggs or pancakes, and hold off on treats until at least mid morning. Our loss I suspect.

So ‘banana bread’ for breakfast doesn’t sit well with me. It crops up on cafe menus all over town alongside baked eggs, baked beans and French toast with brioche, often gussied up with flavoured butter, ricotta or mascarpone. But with all that sugar, it’s not bread; it’s cake!

My friend Relle has a recipe that could almost qualify as ‘bread’; you could just about have it for breakfast. Relle calls it a loaf, and she turns up with it on all kinds of occasions. It’s made with dried apricots and is moist and healthy-tasting, but absolutely delicious, and very easy, she says. When I finally asked her for the recipe I was amazed to find that there were no eggs, oil or butter, and it was made with equal amounts of wholemeal flour and wheatgerm! Wheatgerm is hugely nutritious. It is rich in B vitamins, vitamin E and even omega-3 fatty acids that we normally associate with fish, and it creeps onto some people’s ‘super foods’ lists (although there are many of these and they all seem to be different).

Relle’s recipe for apricot loaf works with any dried fruit, and it even works with bananas as I’ve found here (or you can can make it without if preferred). Other than changing the fruit, all I have done to the original is halved the sugar, as half a cup tastes like plenty to me. It’s still not what I would call breakfast, but an amazing healthyish snack to have in the house.

Preheat the oven to 190°C. Combine the dry ingredients in a bowl, mixing the dates through. Stir in the banana and milk until well combined. Tip into a buttered loaf tin and bake for 30 minutes, then turn the oven down to 165°C and bake for another 15 minutes, or until a skewer comes out clean. Leave to cool before slicing, spreading with butter if desired.