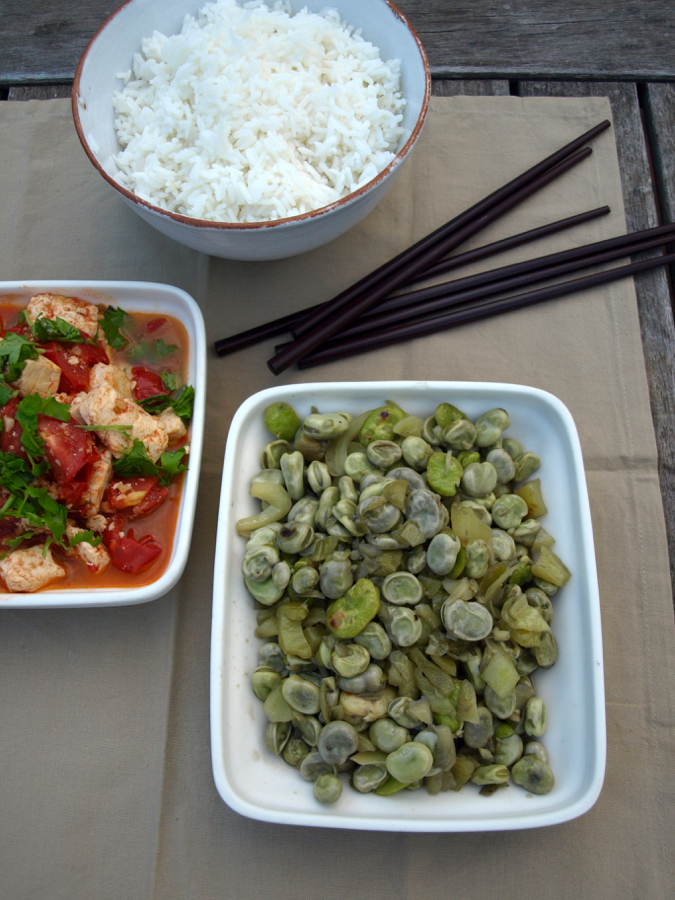 About three weeks ago, spring officially ended in our vegie patch. I pulled out the lettuces that were all of a sudden full and large, the parsley that had gone to seed, and a small, proud patch of my first ever beetroots and carrots. Saddest of all, I picked the last of the broad beans, then chopped off the stalks a few centimetres above the dirt. Instead of a lush green view out the kitchen window, we were left with rather desolate beds scrappily covered with last season’s mulch. And it was suddenly a very different feeling gazing out the window while doing the dishes.

Instead of my eyes resting on green – and feeling slightly clever with the vegies being produced, even if only a few – I stared at our empty beds and mulled over my gardening, which in truth leaves much to be desired! My summer seedlings have come on so slowly this year, despite what I thought was a clever early start. A better seed raiser wouldn’t allow such a gap between one season’s produce and another.

We’ll be waiting a long time before we can eat anything from the garden again – I predict March or April for tomatoes, just in time for the weather to cool down again! – but I should at least congratulate myself in having learnt a small trick. That trick simply is, don’t try to raise seedlings in full sun. No matter how much water you offer. When I finally took my tomato seedlings into some shade, they turned from yellow to green and began to grow faster. (I am sure almost every gardener knows this already!)

Now, three weeks later, you can finally see some green rising out of the mulch. Lovely tufts of chives are poking up, some of the tomato plants are visible too, and the purple and yellow beans are ready to start climbing – amazingly, not a single bean seedling has fallen foul to earwig or slug attack, and I think they will be our best crop. We have installed metal arches from one garden bed to the other and the beans are growing from either side, so we’ll be able to pick them standing underneath, in between the beds.

The broad beans I picked so long ago have been patiently waiting for me in the fridge – they don’t seem to mind at all, still almost as good as the day I picked them. I felt like being greedy with the last of the harvest, so I was waiting for visitors to leave to cook a meal that I knew that my husband, daughter and I would love – one to send out the spring broad bean season with a small hurrah.

I cooked two stir-fries, one being a very simple combination of broad beans and pickled mustard greens from Fuschia Dunlop’s fantastic Revolutionary Chinese Cookbook. The other was a favourite tofu and tomato stir-fry discovered on our travels. Leftovers of both are going to make delicious steamed buns.

Minimal in true Chinese style (the Chinese prefer to mix a few small stir-fries for a meal rather that make a giant one with everything in it), this broad bean stir-fry has a unique fresh tang from pickled mustard greens.

These look like clumps of thick-stalked bok choy without many leaves, steeped in a yellowish liquid and sold in small plastic packages at Asian supermarkets. Maybe they’re a bit on the wild side, but once you’ve bought a packet and cooked with them, you realise they’re not confronting or daunting at all – quite clean tasting – and are just another flavouring ingredient to add to the repertoire, like soy sauce or rice wine. Once opened, they keep in the fridge forever.

Pod the broad beans, which should ideally be on the small side – around the size of your thumbnail to a little bigger (depending on the size of your thumbnail). If there are big beans among them, peel them by piercing the skin with your nail and stripping if off. (If all the beans are large, as they generally are when purchased rather than home-grown, then the quickest way to peel them is to blanch them briefly first – then they slip out of their skins very easily.)

Rinse the pickled mustard greens and chop them. Finely chop the ginger. Heat the oil in a wok and add the mustard greens and ginger and stir-fry for a minute, until fragrant. Add the broad beans and stir-fry for a few minutes, then add around ¾ cup of water and allow the broad beans to boil for 3–5 minutes, until tender, adding a splash more water if needed. There should be a little water left at the end, and you shouldn’t need to add salt as the pickled mustard greens add a nice amount. (If you blanched and peeled your beans, then you should reduce the cooking time.)

Serves 4–6 as part of a spread

One thought on “Broad bean stir-fry”