A pile of potatoes = money in the bank if you ask me (or any of the other small/large humans in my house). This is not the same as declaring love for quinoa or kimchi, is it? I’m pretty sure spuds have never been named a super food, but eating organic ones with the skin on might get them just a little closer …?? They make up for any shortfall with the delight they have to give in so many ways.

A pile of lettuce = not quite the same warm and cosy feelings … They mound up in our crisper, sometimes arriving every week in the fruit and veg box that comes via our neighbourhood co-op (where the potatoes come from, too). Eventually I know I must cast all else aside and focus on lettuce, beyond making side salads (which bores me a little). Oddly enough, I’ve come to see that lettuce leaves/shredded lettuce is key in quite a few great meals of the world! Take Vietnamese bun cha (rice vermicelli with various types of grilled pork and spring rolls), or Chinese dan dan noodles and other similar concoctions, which (I think) are improved by shredded lettuce, and of course tacos, which may have been partly invented as a vehicle for eating lettuce.

P.S. Thanks to Mercedes and Mark, who told me about putting salted, ground, toasted pepitas on tacos (and everything!), and who also gave me the beautiful Mexican tortilla basket and cloth that appears in the photos. 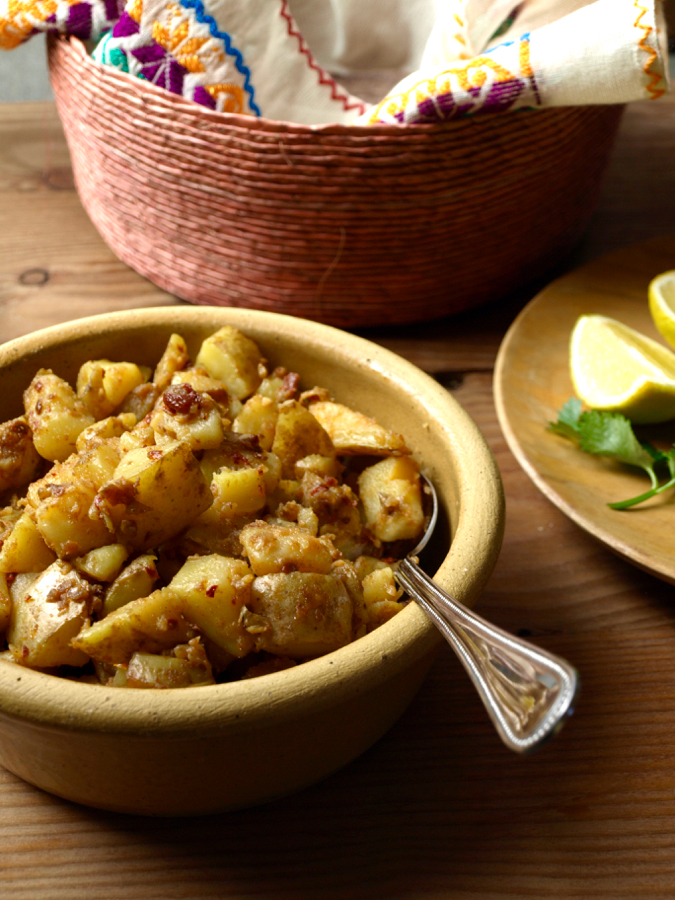 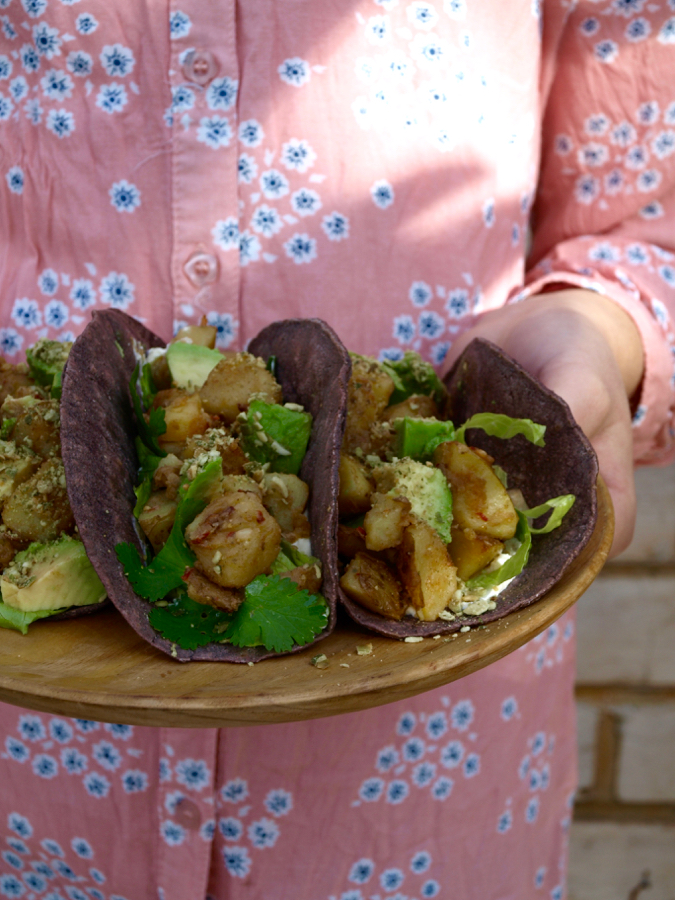 This recipe couldn’t be simpler, and I was so happy when I discovered it – a good (and quick) vegetarian taco to add to the repertoire. Seek out a tin of ‘chipotle chillies in adobo sauce’ (dried and rehydrated jalapenos in a rust-coloured sauce of tomato and spices). Keep the remaining chillies in a container in the fridge for another day. They have so much smoky flavour and warmth, you won’t be disappointed.

To serve
shredded lettuce
coriander (cilantro) leaves
avocado or tomato depending on the season (or both), diced
your favourite tortillas, heated (I use La Tortilleria, which now come in a blue corn version too)
sour cream
lemon or lime juice (particularly if not using tomato)

Cut the potatoes into 2 cm cubes and boil until just soft, then drain.

While the potatoes are cooking, toast the pepitas in a dry frying pan until golden and aromatic, then tip into a mortar with the salt and grind up roughly.

Get all the other accompaniments ready.

Once the potatoes are cooked and drained, heat the oil in a frying pan and add the garlic, sizzling until light golden. Add the potatoes, cumin, chilli and salt and toss in the pan for a few minutes.

To serve, smear a little sour cream onto a warm tortilla and top with warm potato, lettuce, coriander, avocado or tomato, and a good sprinkling of pepita salt. Add a small squeeze of lemon or lime if desired.