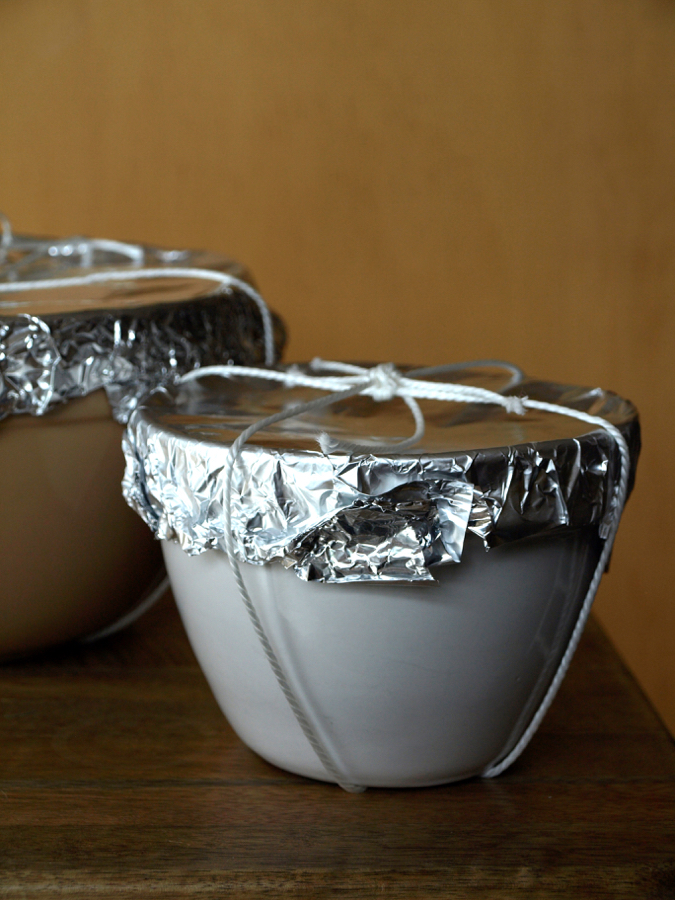 I adored my nana’s Christmas cake and pudding. A few days before Christmas her cake sat upon our sideboard wrapped in a fancy red tinsel cuff, my brother and I just busting to eat a piece. Her pudding was not on display but we knew it was coming … With custard and thick cream after our Christmas lunch, it was almost an otherworld experience. I remember my brother and I had three helpings once – and nana’s pudding didn’t even have money in it!

Of course I thought her cake and pudding were the world’s best, and still do. Her recipes are little pieces of family food history that I have and I’ll be loyal to the end.

The pudding was rich and dark, heavy with fruit, and with an extra luscious layer of what was nana’s secret ingredient – a very vintage bottle of Chateau Yaldara Creme de Cacao. Eventually the effort of making Christmas cake and pudding became too much for nana, and after my temporary horror that they might not exist in our family anymore, I proudly took up the reigns. She handed me her cake tin, her recipes, and importantly, her secret ingredient.

Her recipes are from a beautifully browned page of ‘Epicure’, The Age, 1978, written by a woman named Geraldine Dillon. I still refer to the page, making a few small changes to the recipes. Each year I think I really should laminate or preserve the page somehow before it becomes completely tattered.

The creme de cacao that nana used instead of brandy is part and parcel of the pudding. Opening the bottle, which must be 40 years old, and taking a whiff of the muscaty, chocolatey liqueur takes me back to another time. It reminds me so much of my grandparents. My grandad was a collector. Blessed with many sheds and garages, he slowly filled them up – to the roof. He collected scrap metal and sold it for money, but could not pass up on anything else that could possibly be of value to somebody or useful someday. He had old bikes, soup pots, copper insect sprayers, phone box parts, army gear and huge bins of cutlery. He collected far more than he ever got rid of. When they passed away and we were faced with a mammoth clean-up, we found more bottles of Chateau Yaldara in an old safe downstairs, adding to the original bottle nana gave me. I don’t know how my grandparents came to own them, but I can’t help but think it was another thing they collected. Like their life savings, they were so much better at collecting than they were at consuming. Stockpiling and being thrifty were habits they carried with them from the Depression, my grandad in particular.

With my last bottle of Chateau Yaldara Creme de Cacao past the half-way mark, I’ve come to terms with the fact that its days are numbered and soon I’ll have to use something else. Chateau Yaldara is in Lyndoch, South Australia, but unfortunately doesn’t make creme de cacao anymore, and the lady I spoke to didn’t even remember it. In any case, the old bottle is not really like modern creme de cacao at all, and more like a fortified wine with an overtone of chocolate – like a liqueur muscat I am told. So this year I’ve given muscat a try and I have to admit the pudding is still pretty good.

If you’re looking for a pudding recipe to take on as your own, here is my nana’s recipe. I don’t think it will disappoint. 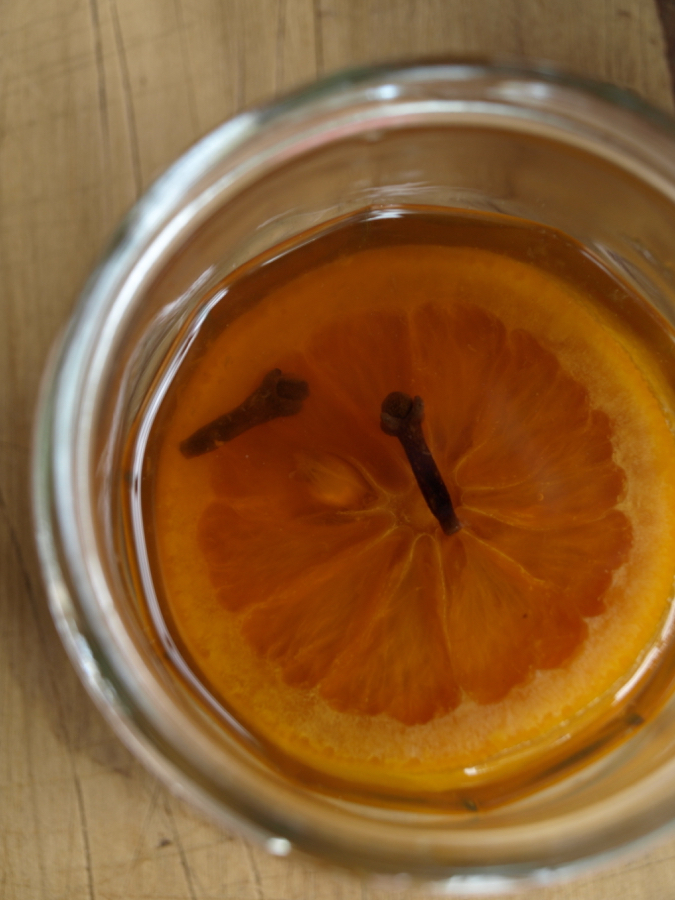 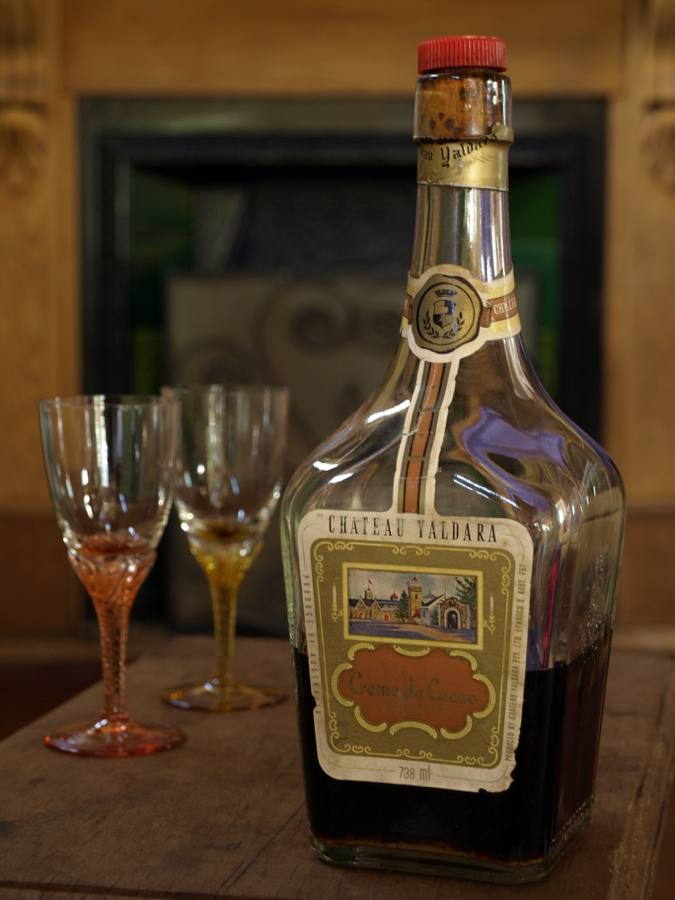 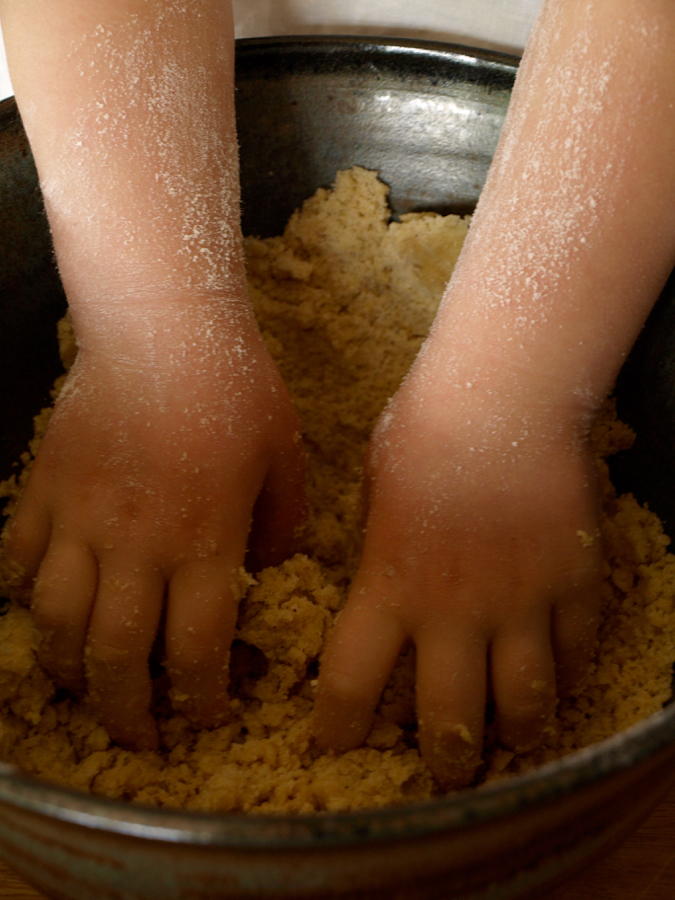 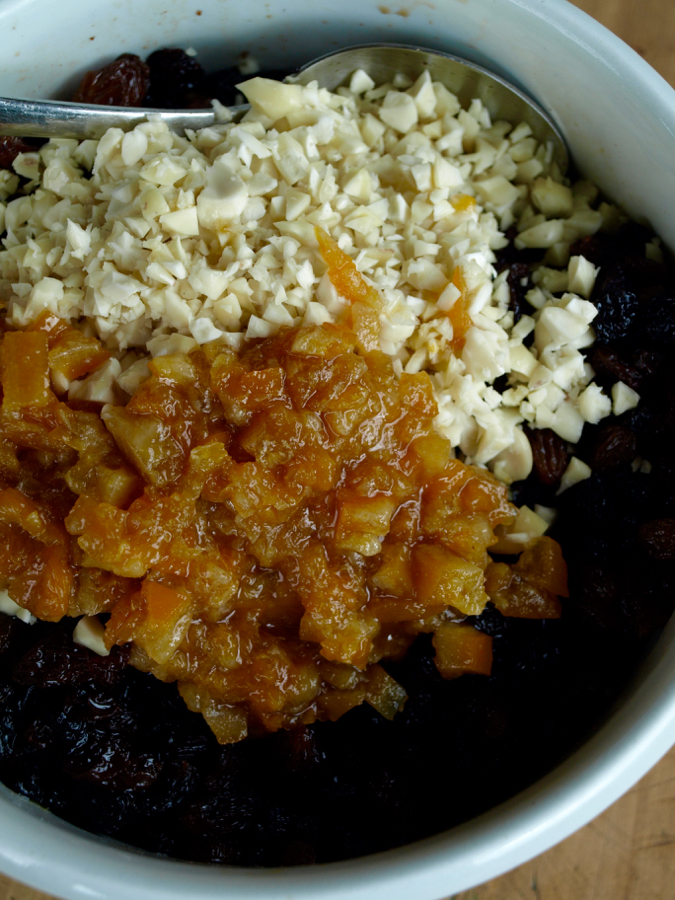 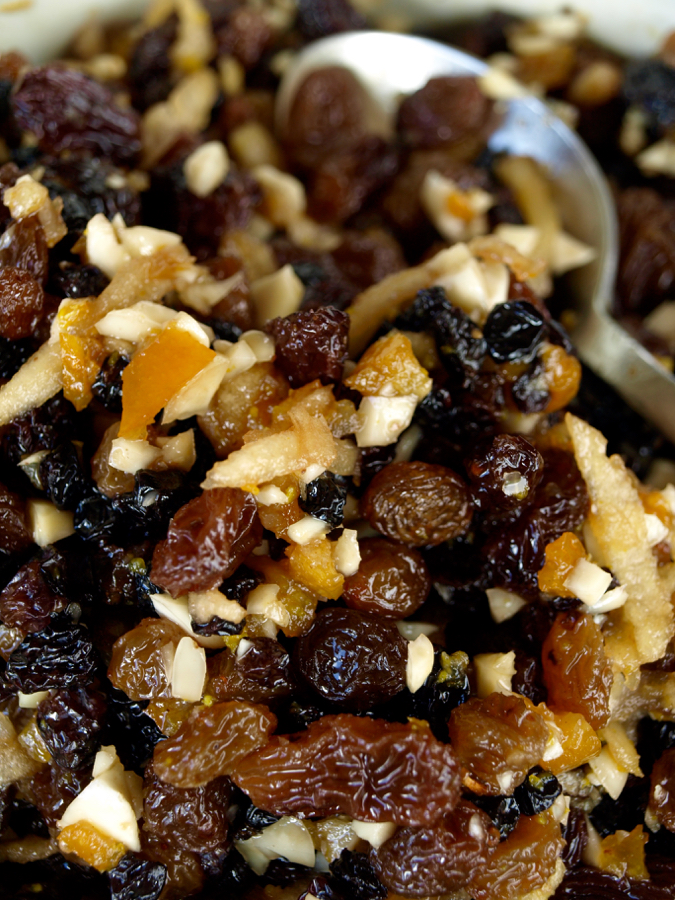 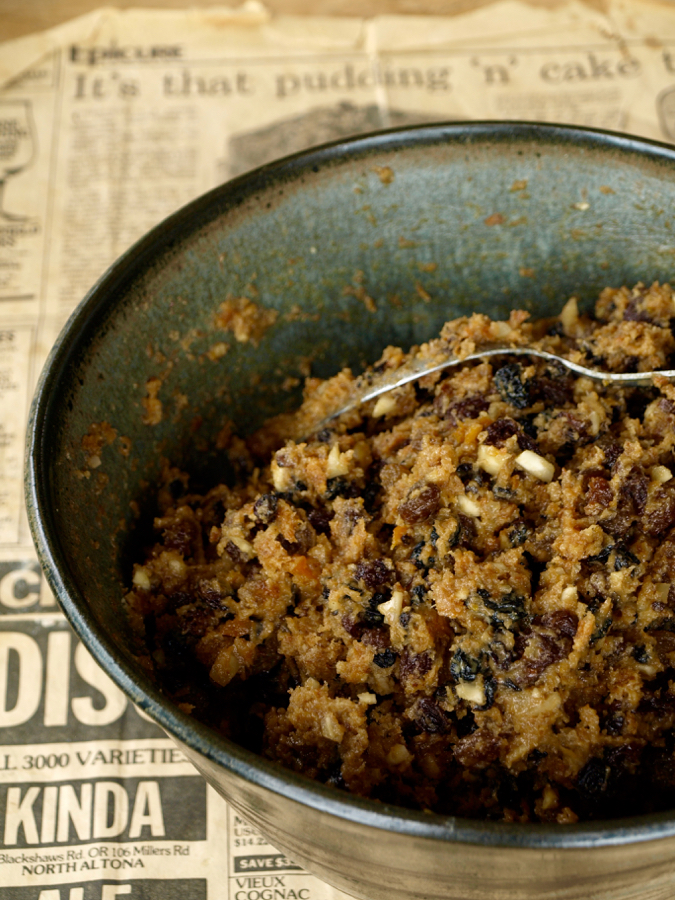 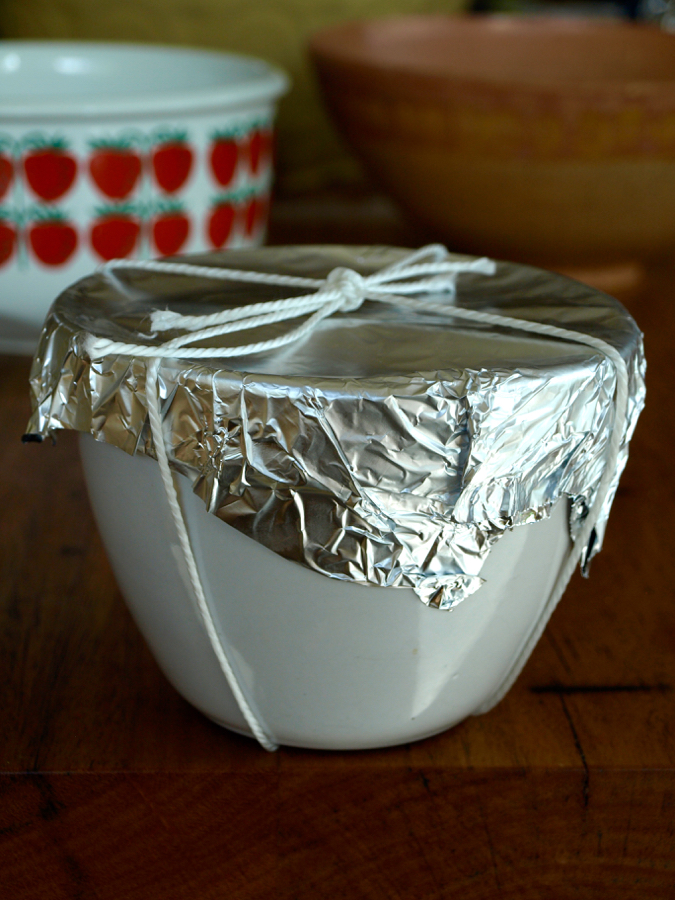 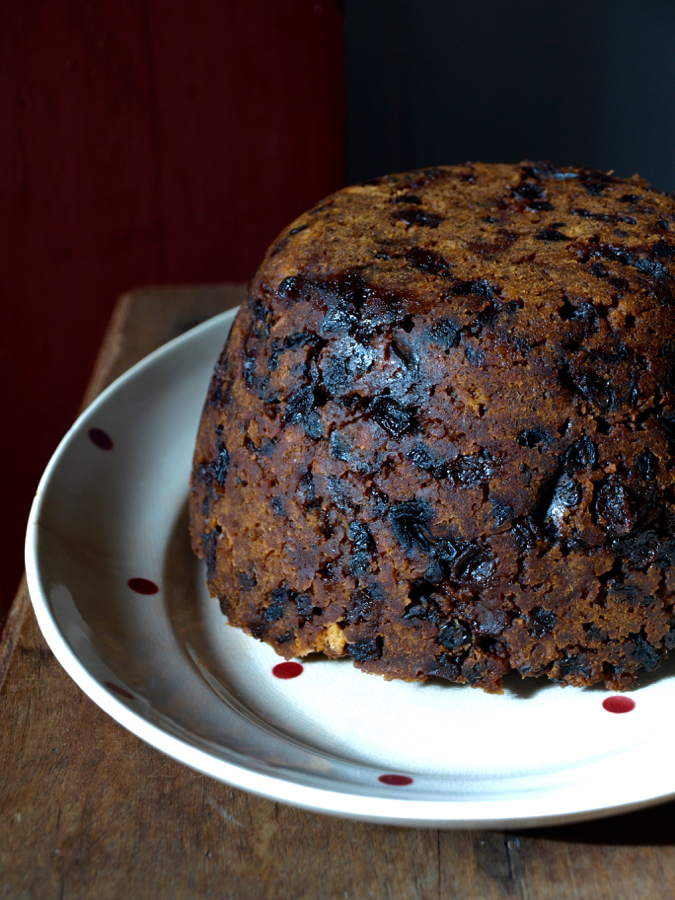 * Make your pudding in advance if you can, to allow the flavours to deepen. But if you can only do it the weekend before Christmas, don’t worry! With so many beautiful ingredients, the pudding is going to taste amazing no matter what.

* Like nana I make the pudding in a basin, but you can make it in a cloth if you want to.

* For the peel, try to buy something nicer than supermarket mixed peel if you can. I make candied oranges in syrup, which keep in the refrigerator indefinitely. The easy recipe can be found in The Hungry Girls’ Cookbook Volume 2.

* You can buy blanched almonds, but it doesn’t take much to blanch your own. Just soak almonds in hot water until the water is cool enough to touch, then squeeze the almonds out of their skins.

The night before you make the pudding, combine the raisins, sultanas and currants in a bowl. Pour on half the muscat and a generous splash of hot water and stir. Leave to soak overnight, stirring a few more times before you go to bed.

The next day, combine the flour, salt, spices and butter in a large mixing bowl and rub the butter into the flour with your fingertips until the mixture resembles fine crumbs. Stir in the breadcrumbs, sugar, beaten eggs, orange zest and juice, and the remaining muscat. Finally stir in the soaked fruit, peel, almonds and grated apple until well combined.

Butter a large ceramic pudding basin around 8 cups in capacity (or alternatively use 2 smaller basins). Spoon the pudding mixture into the basin, filling to about 1 cm from the top. Cover the surface with a circle of greaseproof paper, then wrap the top of the basin in two layers of foil. Cut two lengths of heavy-duty string and tie them together in a knot in the middle. Centre the knot at the bottom of the pudding basin, and bring the sides of string up to the top of the basin, tying in another secure knot. This knot is your handle for lifting the pudding.

Place the pudding in a pot and fill with water to come halfway up the sides of the basin. Put the lid on the pot and slowly bring to the boil, then reduce to a bare simmer and cook the pudding for 6 hours, checking the water levels every now and then. If you are using a few small basins, 4 hours should do.

Allow to cool for an hour or so, then remove the string, foil and paper. Dry out the paper while you leave the pudding to cool further. When the paper is dry, return it to the surface of the pudding and replace the layers of foil (use new foil if necessary) and retie the string handle. Store in the refrigerator.

Before serving, re-boil the pudding for around 2 hours until piping hot. Run a knife around the pudding and turn onto a plate. Cut and serve with custard and thick cream.