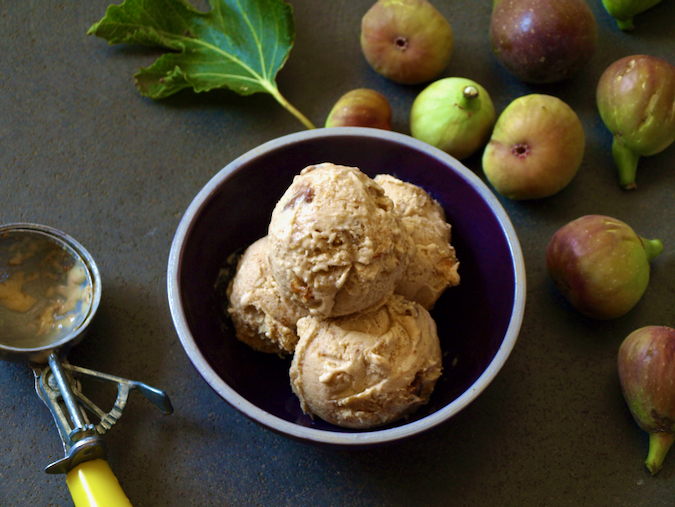 Salt-crusted and wrapped in beach towels, we’re standing on the polished concrete floor of our favourite holiday ice-cream shop, waiting in line though not standing still. The kids are darting off to check the cabinet and make up their minds, while I, their much more respectable adult, am subtly standing on tippy toes and peering around the people in front of me. My two kids have taken to betting which flavour I’ll get – plum, quince, prickly pear; if there is something fruity and unusual, it has ‘mum’ written all over it they reckon. The give me their vote; I feel annoyed, pigeon-holed; then invariably get what they thought.

If fig ice cream is ever on the menu, I’ll try it too … This recipe is my best approximation of ice-cream-shop ice cream, made with the proper custard base (but without a machine). It’s creamy, luxurious and a bit more effort than the other ice creams I make, but such a special treat. (My other recipes are based on whipped cream or meringue and don’t need churning – such as the plum ice cream in the Summer book, and the lemon or lime ice cream in the Spring book and also here.)

Fig season is in full swing in our backyard, and I have grown to love it so much. Not just the fruit, but the pace of it – how the tree flushes with a scattering of plump reddish-brown morsels every few days, for a month or two. Being out under the net entangled with the gnarled grey branches, sun streaming in sideways, has become a marker of late summer and early autumn for me. Most people don’t net fig trees in our neighbourhood – if you leave them uncovered, then the birds and bats help you out and you never have to deal with a deluge. But if I net our tree, we have plenty to share, which makes so many friends happy. Feels worth it to me!

Our new puppy likes to keep me company in the backyard, and it turns out she loves figs. She follows me excitedly under the tree and looks up irresistibly waiting for another one. I’ve had to cap her at three figs a day, but she won’t be getting any ice cream. 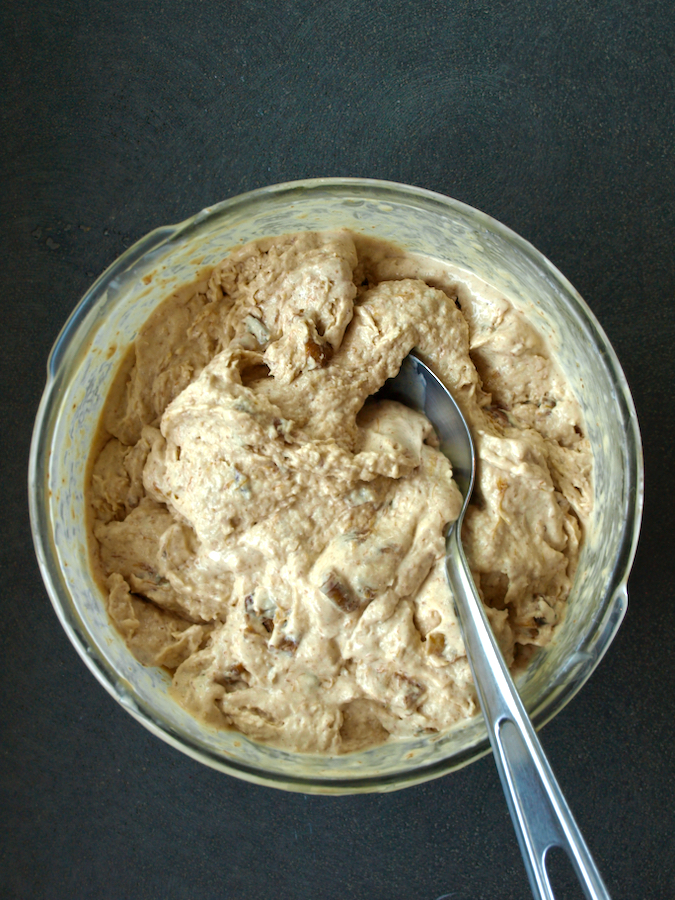 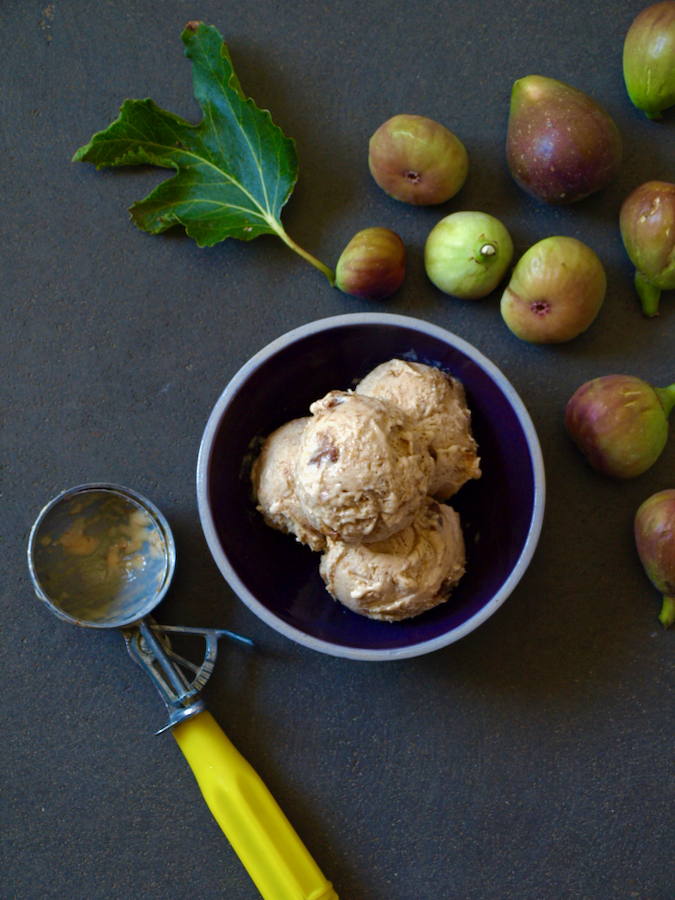 The figs are roasted with a drizzle of honey until they become jammy and caramelised, while the custard contains cinnamon, and a little lemon zest too.

You need to start this ice cream the day before, chilling the custard and figs overnight, then starting the freezing process the next morning, If you have an ice-cream machine, definitely use it here! Otherwise, I give manual churning instructions.

Preheat a moderate oven while you slice the stems from the figs, then dice the fruit into small (about 2 cm) pieces. Toss onto a tray and drizzle with the honey. Roast in the oven for around 30 minutes, stirring a few times during cooking, until the figs are jammy and caramelised. Leave to cool, then scrape into a bowl or container.

Meanwhile, combine the cream, milk and sugar in a saucepan and heat gently until the sugar dissolves and the mixture is steaming hot. Whisk the egg yolks in a medium bowl with the cinnamon, then pour some of the hot milk mixture onto the yolks while whisking. Return the yolk and milk mixture back to the saucepan. Continue to cook over low–medium heat, stirring almost constantly with a wooden spoon, until you have a light custard (really resembling eggnog more than custard). This takes about 10 minutes of heating. Towards the end, the mixture seems to feel and look heavier as you swirl it around, and when you run a finger across the surface of the spoon, it should leave a clean line through the custard. Tip into a bowl and leave to cool. Don’t worry too much as the custard forms a skin – it will be non-existent when churned into the finished ice cream. Refrigerate the custard and figs overnight.

The next morning, whisk the lemon zest into the custard. Put the custard into the freezer – you can either leave it in the bowl it is in, or transfer it to a container (the wider and flatter the bowl/container, the quicker the freezing). Also put the figs in the freezer. At the same time, put the mixing bowl that you plan to use for churning into the refrigerator (this way you won’t lose too much temperature when churning).

After freezing for about 2 hours, the custard should have a thick rim of ice with the middle still runny. Tip into your chilled mixing bowl and mix slowly with electric beaters. Then gently churn in the partially frozen figs. Return to the bowl or container that you used for freezing, and freeze for another hour or so. (Refrigerate the mixing bowl again, plus the beaters and spatula.)

Repeat the churning. Then in another hour, repeat again. After this third churning, transfer the mixture into a storage container/s and freeze for at least another few hours. This ice cream tastes best when allowed to soften slightly before serving.

*Note re quantity of figs: I usually make a fruity ice cream using 800 g figs (they have a lovely chewy texture), but you can use 600 g figs if you desire a creamier ice cream closer to what you get in an ice-cream shop.