When my mum talks about food, I listen. It isn’t usually on her radar – she’s much more of a book and movie fiend, an avid follower of current affairs, a lover of indigenous cultures, a keen traveller, and an amazing woman in general … For food to rate a mention, it has to be beyond good. Like the broad bean and ham dish she once had in Spain and still talks about, and the stuffed tomatoes she had in Greece.

These tomatoes didn’t have a minced meat filling like I might have assumed – just a vegetarian, rice-based stuffing. They sounded great to me. I could just picture them, bright red and slouching in a slick of olive oil, against a backdrop of blue sky and sea, and all those beautiful white-washed buildings of the Greek islands …

It all fell into place when I picked up a little Greek cookbook in an op shop sometime later. It’s one of those small, cloth-covered hardbacks with yellowing pages – called Cooking the Greek Way by Maro Duncan, published over 50 years ago. If I could collect the whole series of these books, I would. I found two recipes for stuffed tomatoes in the book, including a vegetarian one like the dish Mum described.

I’ve been making and tweaking the recipe over the years (in summer whenever there are enough tomatoes in our garden). It’s so simple and good. That tomatoey rice – cooked in nothing else but the tomato juices. Even the kids can’t stop at one tomato. 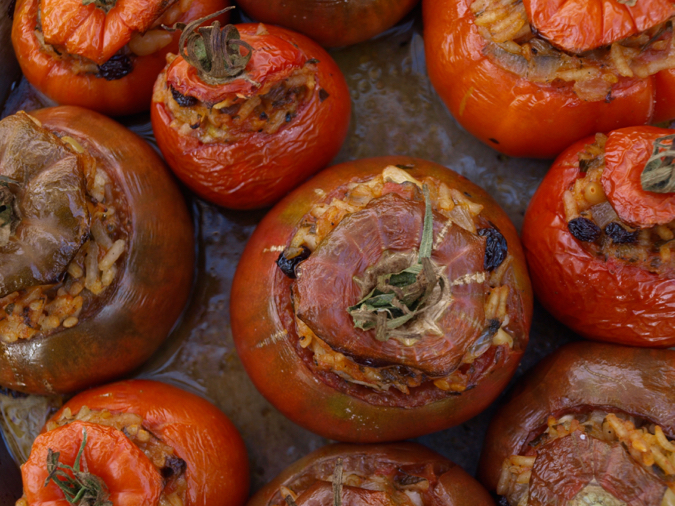 Serve these tomatoes with a salad (a green salad – or a Greek salad!), or just a big pile of dressed green beans. To make the meal more substantial, add some bread on the side, or part-cook some potatoes and roast them together with the tomatoes, adding a little more oil, salt and pepper.

Use a small, sharp knife to cut the tops off the tomatoes, and set these aside. Cut a circle around the exposed tomato flesh about 1 cm in from the sides. Use a teaspoon to gently scoop out the tomato pulp and seeds, trying not to scoop too deeply or damage the sides. Drop the pulp and seeds into a bowl as you go. Once you’ve hollowed out all the tomatoes, pull out the large pieces of flesh from the bowl and chop them into smallish pieces, then return them to the bowl.

Heat the oil in a saucepan over medium heat and add the onion, frying until soft (around 4 minutes). Stir in the pine nuts and rice and cook, stirring, for another few minutes, until the pine nuts and rice are becoming slightly golden. Add the currants, tomato pulp, salt and pepper and stir well (if your tomatoes didn’t seem particularly juicy, you may need to add a splash of water here too). Cook for 5 minutes or so, or until the tomato juice has been mostly absorbed and the rice is starting to catch on the bottom of the pan. Remove from the heat and stir in the parsley. The rice should only be part cooked. Leave to cool for at least 5 minutes.

Preheat the oven to 170°C. Lightly salt the hollowed out tomatoes, then fill with the rice stuffing. Don’t push down too hard on the stuffing, and aim not to over-fill the tomatoes (which could both lead to the tomatoes splitting in the oven). Put the lids on the tomatoes. Place them on a lightly oiled tray or baking dish and cook for 30–40 minutes, until the tomatoes are wrinkled and soft. Serve hot or cold.

One thought on “Greek-style stuffed tomatoes”