My ears pricked up when I read about the ‘three sisters’ way of growing corn, beans and pumpkin together, Native American style. I jumped on board this summer, very, very excited. It felt like I was conjuring up a little bit of garden magic.

The corn grows tall, providing its sturdy stalks for the beans to climb up. (To be honest, this was the part I felt was most genius of all – no staking required!) The beans are planted close to the corn and give nitrogen to the corn via their roots. And while these two plants are busy growing upwards, pumpkin covers the ground all around – a ‘living mulch’.

I found out that the corn and beans are usually planted in a circle and on a mound … but I skipped the mound part and just planted into flat soil that had a good amount of compost/manure added. The corn was planted about 2–3 weeks before the beans, for a head start. I planted 6 corns in a circle, then later planted 6 beans about 10 cm away from each corn. Nearby I planted a pumpkin about the same time as the beans.

It was a jungle out there! Such a wall of green foliage all tangled together. To make matters even more interesting, I planted a baby corn variety instead of regular corn – just because I also had a burning desire to grow baby corn since enjoying a dish of it in Cambodia some years back. I couldn’t see why baby corn wouldn’t work just as well as regular corn, as the plants grow to the same height; you simply pick the corns when they are smaller, which keeps triggering more and more corns to come. (The baby corn was so delicious! Another story.)

We enjoyed about 6 weeks of baby corn and harvested 2 lovely pumpkins. The beans are still producing now. As it turns out, growing the three sisters together doesn’t necessarily mean harvesting all the produce at the same time. I would have normally pulled out the corn plants by now, but of course I can’t because the beans are attached! The tops of some corn plants bent in half in windy weather, and the whole climbing/tumbling structure looks quite funny … This might be one small drawback about the three sisters method (and it would be even more of a drawback if, say, you had some kind of bug situation that could be transferred from one plant to another).

One other small drawback is that picking the beans is hard with the corn foliage in the way as well. (But actually, picking beans and trying to spot all the big ones is tricky business even without corn, so it isn’t much more difficult … Put this down to an adventure!)

Since planting my three sisters patch, I’ve also read that you don’t have to plant pumpkin, just something from that family. So it could be a few cucumbers, if you were interested in something that took up a little less space. 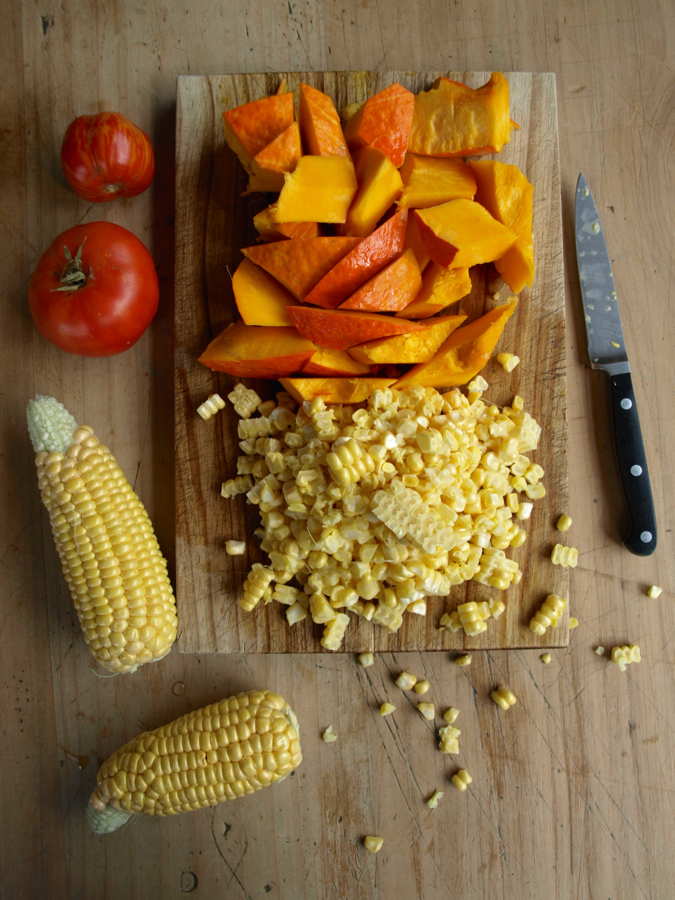 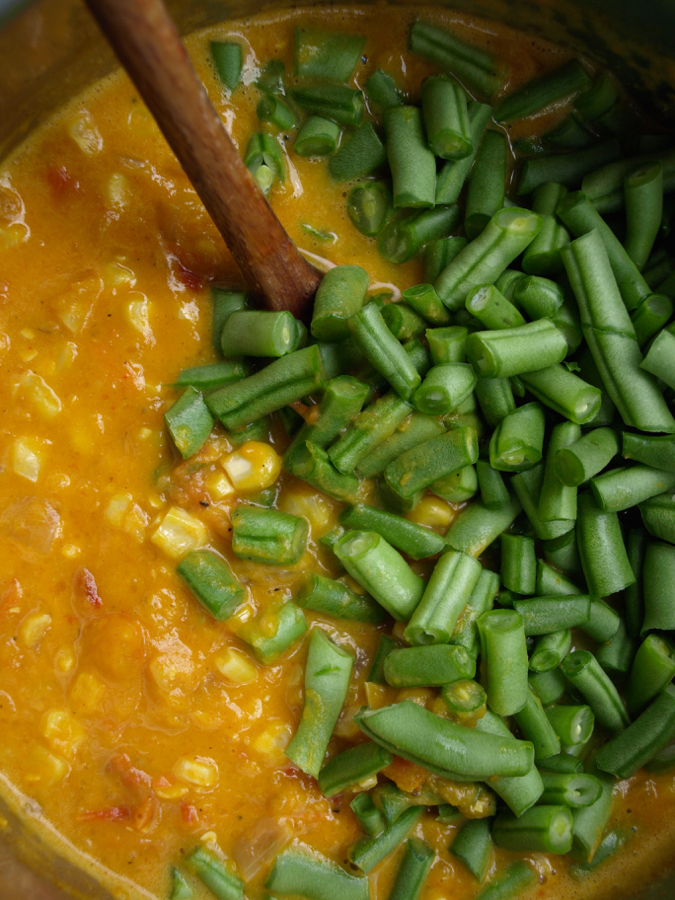 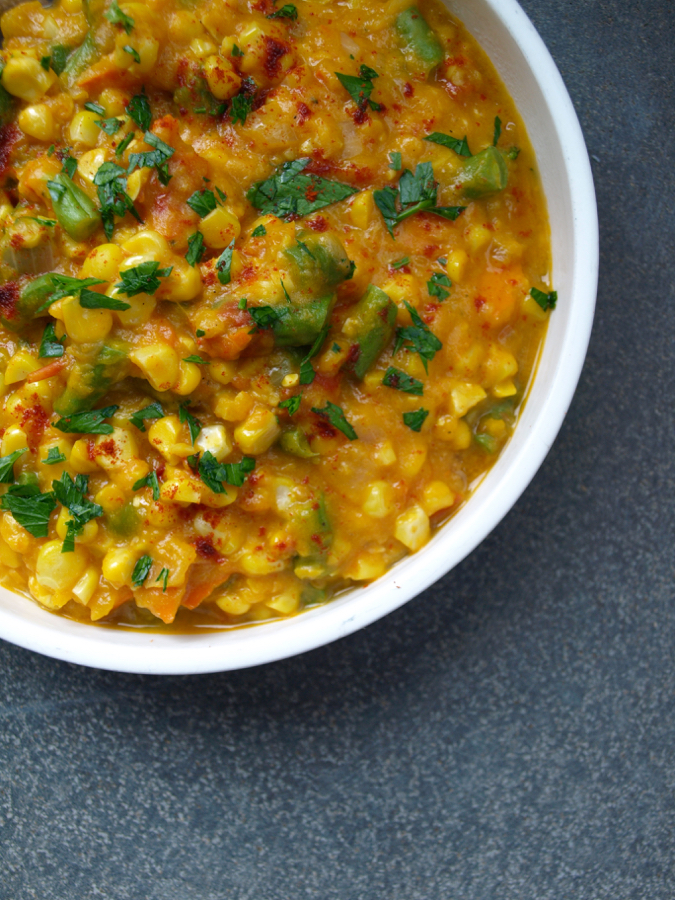 I tried the delicious dish called humitas at an Argentinean restaurant and vowed to recreate it. In some South American countries, humitas is the name for corn cakes steamed inside corn husks (like tamales), while in Argentina it is a vegetable stew minus the husk covering. It always has corn; sometimes pumpkin. It occurred to me that with pumpkin it was almost a three sisters dish! I made it true to the original the first time, and then the second time I couldn’t help myself; I slipped in some beans too. They weren’t at all offensive – another texture like the corn kernels suspended in the creamy pumpkin.

The dish (beans or no beans) is so good in late summer and autumn when the ingredients are all in season. (In fact, humitas is traditionally served at Easter). You can serve humitas just on its own with bread to mop it up, or with steak, fish, roast lamb, chicken … This version is not strictly traditional as I have made a few subtle changes such as adding the lime juice.

Heat the butter in a large saucepan and add the onion. Sauté until lightly golden, then add the garlic and fry for another minute or so. Add the pumpkin, tomato, spices and salt, plus enough water to just cover. Cover with a lid and simmer for around 20 minutes, or until the pumpkin is soft and starting to break up.

Add the corn kernels and milk and continue to cook for another 10–15 minutes, by which time the pumpkin will almost be a puree. If using beans, add them for the last 5–10 minutes.

Remove from the heat and stir in the lime juice. Taste for seasoning, adding more salt (and pepper) if desired. Stir in most of the basil or parsley, sprinkling the remaining on top. Sprinkle with a little extra paprika. Serve hot or warm.