This soup makes me ridiculously happy, for a lot of reasons. A sure first is remembering the day last year when we hired a car and drove deep into the mountains of Shikoku, Japan. It was a big day in the car, punctuated by pockets of time spent in the quiet little villages of the Iya Valley, and at our final destination before we turned back, which was the double vine bridges suspended high above a turquoise river.

The Iya Valley is just a few hours away by car from several small coastal cities, but feels extremely remote. The gorges are deep; the roads narrow and winding. It is buckwheat terrain, and I think in a nation obsessed with fish and seafood, it could not be more than an exotic and faraway thought here.

Part of my vision for the day was to find local soba (buckwheat) noodles for lunch – eating the landscape, as much as feasting on it with our eyes. But the little restaurant we were aiming for was so tricky to locate that we drove straight past it and had to ask for directions and double back. Tense moments in the car … There were not legions of other restaurants leaping out at us at every turn. We might have been eating fern fronds on the side of the road if we didn’t finally find it.

I think we were a mid-week oddity for the slow-moving couple running the restaurant. But the woman served us some lovely soba noodle soup all the same, and I ordered a small bowl of this vegetable soup with buckwheat kernels in it. I loved the idea even before I tasted it – just skipping the noodle idea altogether and heading straight to the whole grain (or seed). It’s a bit of a revelation (especially if you don’t eat gluten – as most soba noodles contain wheat flour too – or if you are just into whole grains like me).

Grated fresh ginger on top is another revelation. Actually, this particular soup wasn’t served with fresh ginger, but the noodle soups we had that day were. I had to include it here because it’s so great. It gives the soup fresh heat and makes it taste incredibly … Japanese.

When I was figuring out the recipe, I took a leap of faith and went forth without adding any dashi broth. Dashi (fish-based stock) is ubiquitous in Japanese soups, but I wasn’t so sure in the Iya Valley … or at least in this soup. I think I totally nailed it! If I do say so myself. (Oh how I love collecting and writing recipes.) The vegetables make their own light stock while they cook.

If you need any other reasons to try this soup, it is also impressively quick and easy. I made it with wild pine mushrooms, but you can also use fresh or dried shiitake. 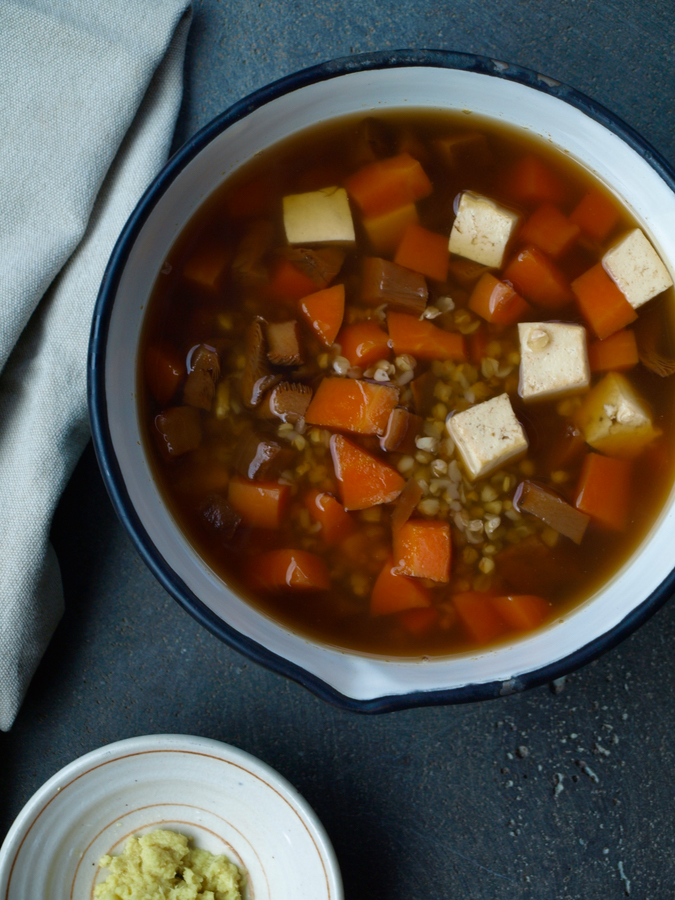 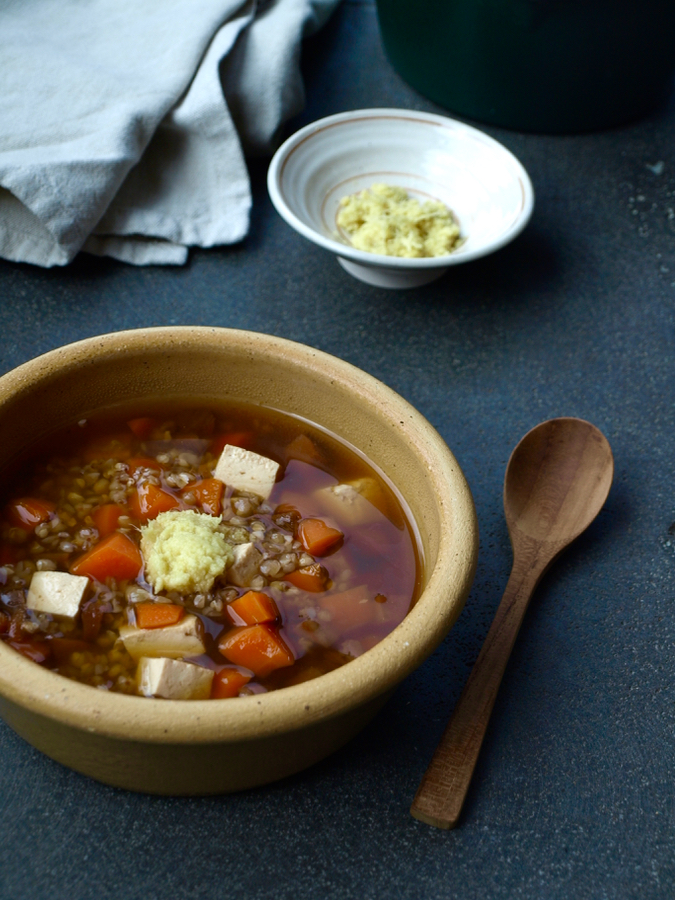 Combine the water, carrot and mushroom in a large saucepan and bring to the boil. Reduce the heat to a simmer and cook for 12 minutes.

Meanwhile, put the buckwheat kernels into a small saucepan and cover with generous water. Bring to the boil, then reduce the heat to a simmer. Cook for 10 minutes, or until the kernels are just soft. Drain and rinse the buckwheat.

Add the tofu, soy sauce and mirin to the soup and cook for another 3 minutes. Stir in the buckwheat and heat briefly, then remove from the heat. Serve in bowls with dollops of grated ginger. Garnish with spring onion if you have it – although the soup is also perfectly great without.