This year’s Christmas and holiday packing essentials: presents, clothes, a tent, sleeping bags, an esky, cooking equipment, swimming stuff, six jars of sauerkraut and olives, chocolate truffles I’ve been experimenting with, panettone, nougat, potted prawns, Spanish pickled vegetables, drinks (maybe this one), two types of biscuits because one doesn’t seem enough … Yes, that sounds crazy! But the people who are close to me love me, I think 🙂

After Christmas there are always lots of cuppas and biscuits at the in-laws – lazy moments when I remember that shortbread is my favourite food group. It feels nice to be able to contribute, whipping out some of our own biscuits too. Earlier in the year I made candied orange peel, which got me thinking about florentines. They’re a Christmassy kind of biscuit, don’t you think? (Even if it’s not official.) I do like the chocolate coating, but think they are also great without it. These florentine-esque biscuits have a bit of extra fruity, nutty substance to them, with some favourite spice added in.

I stopped buying mixed spice long ago when I realised I already had all the individual spices on hand. It’s easy and fun to make, and the kids love doing it. We know it’s the ticket to some of the best treats of the year – Christmas cake and pudding, and hot cross buns. It is also used in speculaas, which is the second biscuit I’ll be making this Christmas. I must love spice.

If you have ground rather than whole spices, just take a guess how much to add – slightly varying the quantities won’t ruin your mixed spice.

Smash the piece of nutmeg to crumbs in a mortar. Add the cloves, seeds from the cardamom, and allspice berries, and grind as fine as possible. Stir in the ground spices. Store in a small jar. 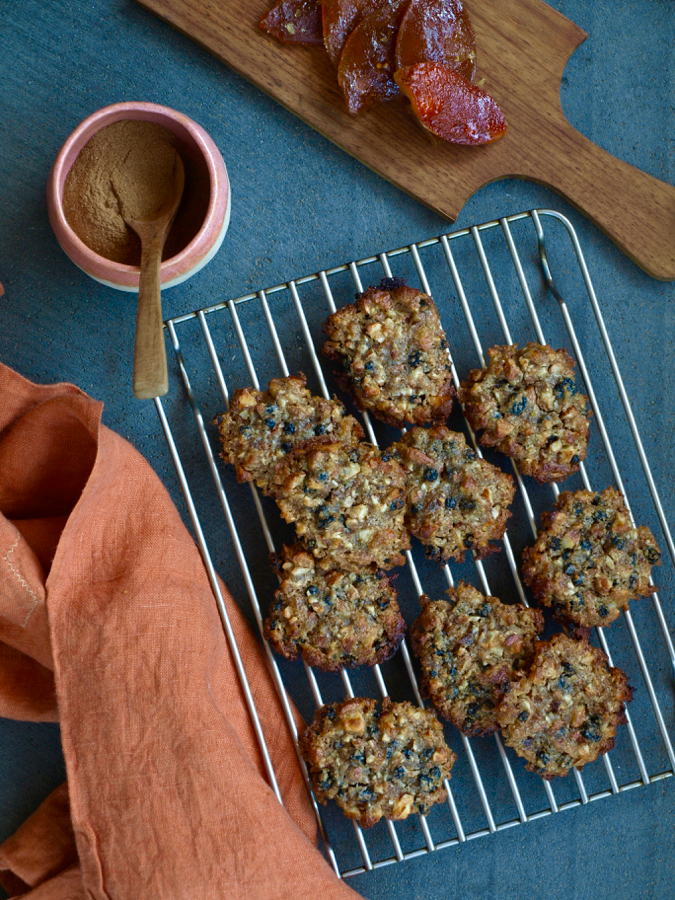 These were inspired by florentines, with some spice making them a little Christmassy. I think they are great at any time of year.

Because they only have a small amount of flour, I like to use buckwheat flour (gluten free) or rye, as it doesn’t affect the flavour at all. If you prefer, use plain flour.

Melt the butter in a saucepan (or in a bowl set over a saucepan of simmering water if you prefer, or in a microwave). Remove from the heat and whisk in the sugar, honey and cream. Add the flour, currants, almonds, peel and spice and mix well.

Preheat the oven to 180°C. Line a few trays with baking paper and add heaped teaspoons of the mixture in blobs, leaving about 3 cm in between to allow for a small amount of spreading. Flatten and shape the blobs a little. Bake in the oven for 10–15 minutes, or until golden around the edges. Leave to cool on the trays for 10 minutes or so before transferring to a rack to cool completely. Store in a jar.