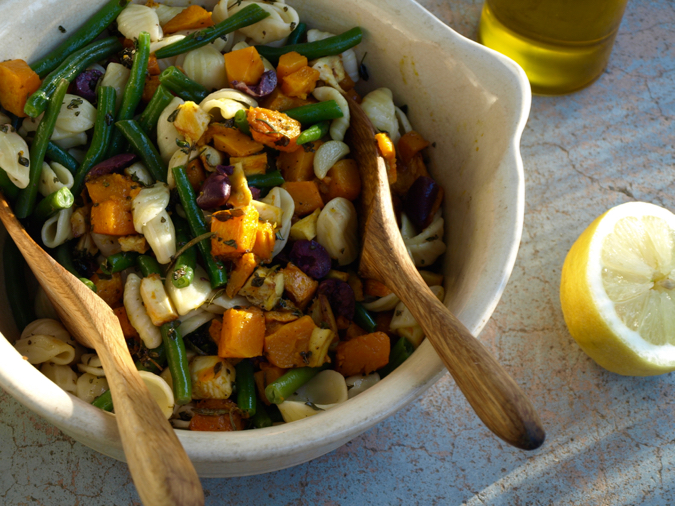 I started out making pasta when I moved out of home, at age 17, featuring a crisper worth of vegetables plus some pesto from a jar. (Wry smile thinking about the strange tiles of pumpkin I used to cut, and the undercooked eggplant. But I was doing a good job of eating vegetables at least!)

Somewhere along the line I pared pasta right back, and these days I like it to be fairly restrained, true to how the Italians make it. Usually featuring a few main ingredients – spinach, anchovy and garlic; eggplant, tomato and basil; potato, kale and garlic … I like it traditional, or if I’m getting creative I don’t stray too far.

Somewhere else along the line, another thing emerged for me, which is pasta salad. Even though the word ‘pasta’ is in there, in my mind it’s a different thing. And it’s not like one of those below average salads you get from a supermarket deli or charcoal chicken shop. Fresher, lots more ingredients to pasta, and a lovely, simple dressing.

It’s a rough template, and you can put just about anything in it depending on the season and what you have. Sometimes I’m just in the mood for making it – roasting and prepping a bunch of ingredients, cooking pasta, and stirring everything together in a big bowl with a lick of oil and a splash of nice vinegar or lemon juice. It’s a great user-uperer of odd small bits and pieces in the fridge or garden. Not traditional, just an expression of your current place in space.

This one was inspired by a load of garlic from my dad’s place – it’s a long story. We had plans to sell it, but it’s not as good as it should be, so now I think we might just eat it! It’s actually pretty cool being able to be outlandish with garlic because you have so much, i.e roasting 40 cloves here, 40 cloves there. Roasted garlic is so good! If you don’t have garlic, roasted red onion is another beautiful thing. 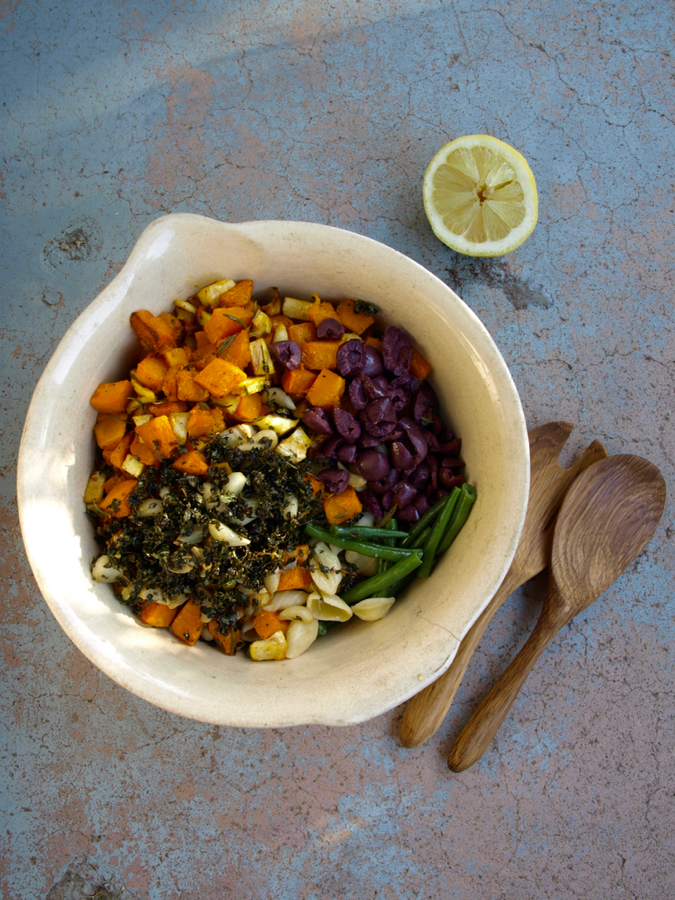 1 or 2 types of root vegetables (i.e. pumpkin, carrot, parsnip, potato), cut into small cubes and roasted
1 red onion, sliced, or 2 heads of garlic, separated into cloves but not peeled – roasted with the vegetables
½ packet of short pasta of your choice
salt
large handful of beans or cherry tomatoes (or both), cut in half
handful of rocket or baby spinach leaves, or chopped parsley
large handful of olives, pitted and roughly chopped
pepper
olive oil
lemon juice, or sherry or red-wine vinegar

While the vegetables are roasting, bring a large saucepan of water to the boil with a heaped teaspoon of salt. Once boiling, cook your pasta. If you are using beans, add them to cook for the last 2 minutes. Drain and tip into a large bowl.

Add the roasted vegetables to the pasta. If using garlic, slip the cloves out of their skins into the bowl. Add the tomatoes if using, and rocket, spinach or parsley. Add the olives. Season with salt and pepper and add a generous splash of oil plus a squeeze of lemon juice or a small splash of vinegar. Toss well and taste, adding more salt, pepper, oil and lemon/vinegar as needed. Serve warm or at room temperature.