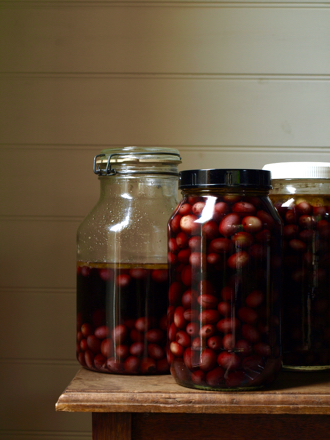 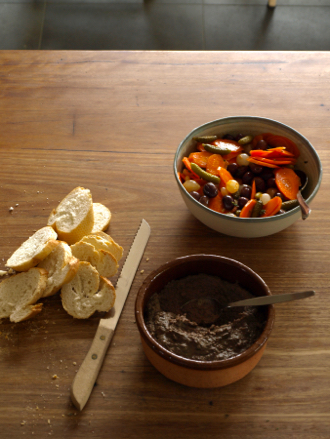 Lots of things converging here: the homemade olives we are tickle pink with; a Spanish-inspired quick pickle featuring said olives and other puckering bits (and delicious vinagery carrot!); my friend’s mother’s pâté recipe, which is as much a celebration of onion and nutmeg as it is chicken livers. I’ve made these two dishes multiple times through December and January – peasant food that is fit for a Christmas table, or for get togethers and celebrations of any kind.

Olives
To be honest I never thought I’d be the olive pickling type. We don’t have an olive tree, and Mount Zero olives are delicious, not too expensive, and come from just up the road! But on the way to and from kinder in spring last year – way past the traditional season for harvesting olives, which is autumn – I noticed so many large kalamata-shaped olives hanging from two trees out the front of a block of flats. Each time I walked past I looked and pondered, until I eventually felt the trees were begging me to come and unburden them of at least some of their olives! No one else seemed to want them.

One sunny weekend we filled a bucket – then had a olive scoring session around the kitchen table. Only I should have asked my Greek friend Rina for her family recipe before we set to work, because later when I read it, I realised you are meant to be gentle with the olives so as not to bruise them, i.e. letting the kids put 20 scores in each olive in a crisscross pattern was probably not a good idea! At one stage I also recall our five-year old trying to cut the olives with the wrong side of the knife …

Still I proceeded to soak them and change the water daily for three days, then to make the salty brine and leave them for six weeks … I was quite sure they were going to be a disaster and we were going to have to chuck the lot – until I finally tasted one. YUM!! The olives are brilliant. I have a feeling we will be doing this again.

Pickles
These pickles are inspired by something I have seen for sale at Melbourne Spanish deli, Casa Iberica. A mixture of olives tumbled with gherkins and other salty/vinagery morsels, plus slices of humble carrot, which is really what got me in. I could just imagine how good pickled carrot would be in the mix.

Online I found out that this mix is called variantes. Last month I started making my own version, and a bowl is liable to disappear very fast. The pickles are very nice with pâté, but of course you can also have them with cheese, bread and butter …

Pâté
I have a good friend Alice who makes this pâté for parties, and it is so moreish. I have cravings to make it every so often, and became fixated with the idea of it when I was pregnant, because pâté is something you’re not meant to eat of course! Now that I’ve come to write the recipe here, I’ve been looking at a few other pâté recipes and have realised they are all so different, and some aren’t even made with liver but with meat. Actually I really like this liver version, because in our house we never eat liver any other time (although it was a secret ingredient in an old neighbour’s bolognese), and it is such sustainable, cheap and healthy meat. (The amount of free-range chicken livers you need costs just $2!)

The pâté also has lots of onion, and lots of nutmeg – probably another reason why I love it. Leftover pâté can be frozen, or made into delicious sandwiches with cucumber. 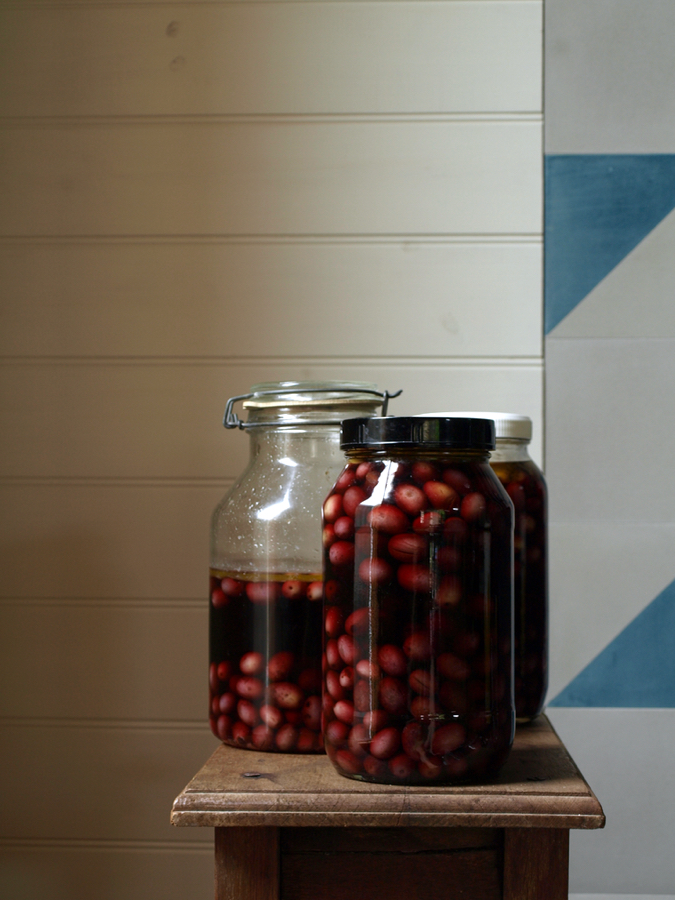 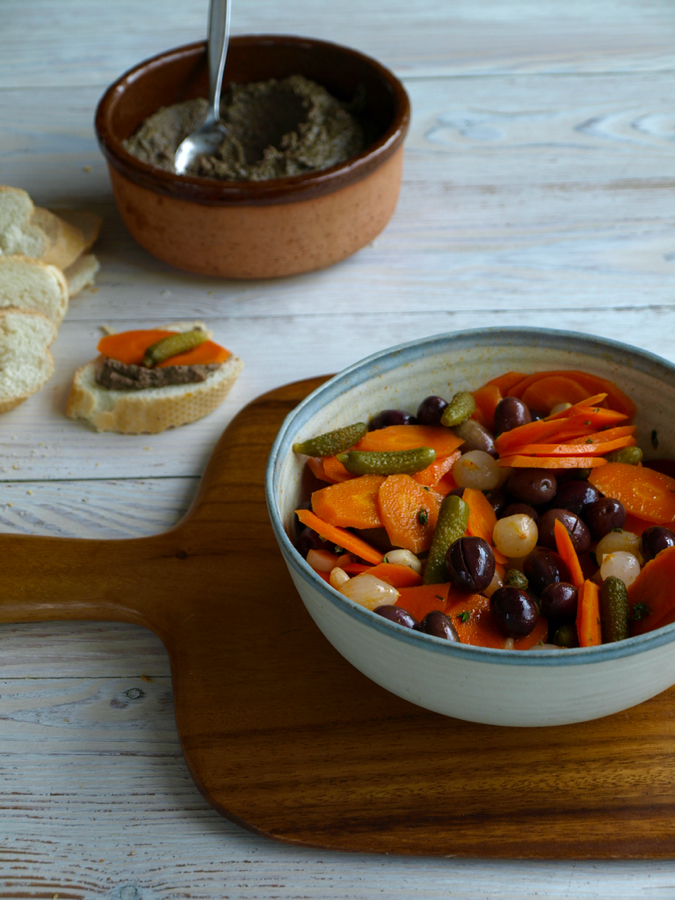 Melt the butter in a frying pan over medium heat and add the onion and garlic. Saute until soft but without much colour. Add the livers, nutmeg, salt and some pepper and cook for around 5 minutes, turning the livers halfway through, until thoroughly browned on the outside but still pink in the middle (cut a piece to check inside). Pour in the brandy or sherry and cook for another 30 seconds, then remove from the heat.

Transfer the liver and onion mixture to a food processor and let the mix cool down a while before you blend it to a smooth pâté. Taste for seasoning, adding more salt if required. Scrape the pâté into a bowl and leave to cool. The pâté will keep in an airtight container in the fridge for 1 week, and can also be frozen.

Feel free to play around with this quick pickle recipe and add your own favourite ingredients. The onions are optional – the ones that I have found have either been too big or too sweet, but if you find some that are a good small size and not too sugary, you should definitely include them.

Bring a small saucepan of water to the boil and add the carrot and garlic. Boil for 1 minute, then drain. Place in a bowl with the oil, vinegar, salt, paprika and chilli, stirring to combine, and leave to cool down.

Mix in the olives, gherkins, onions if using, and thyme. Leave to marinate, stirring occasionally, for 2 hours or more. If making the pickle a while in advance, keep the mixture in the fridge.