Citrus is incredible at the moment. The colder it gets, the better it seems to taste, which helps me to remember that even the chilliest depth of winter is a season I should love (I try!). Friends sent a big bag of home-grown mandarins our way and I think they’re imperials (the most popular and common mandarins), but they’re so different to commercial ones. Their skin is still touched with green and inside they’re bursting with juice. They have more pips than usual, but their flavour is so sweet and real and wintery. 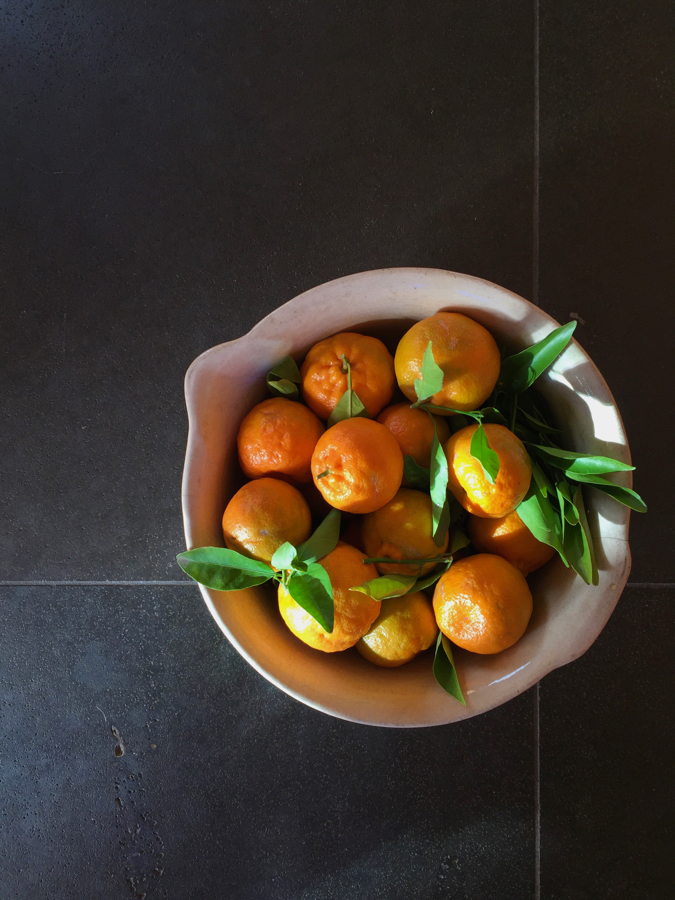 Family in Warrnambool have an orange tree that they’ve espaliered and it’s growing on a fence next to a fellow espaliered lemon tree, only it’s growing about half the speed (oranges are a slow-growing citrus). Right now it’s laden with fruit and I think it’s up there with a blossoming magnolia for winter beauty – such deep green leaves and bright glowing orbs all over it. My sister-in-law told me that the fruit was disappointingly tangy, but that didn’t stop me wanting … I snared a few and made a gorgeous Middle Eastern orange and almond cake (the famous Claudia Roden recipe). I think if they were my tart oranges, I’d make orange cordial using a lemon cordial recipe. Or orange jelly. Or orange ice-cream … One day our own orange tree that we planted in the wrong spot and have now transplanted to a sunnier spot may actually produce oranges. Dreams!

Have you ever tried pomelo? They’re the giants of the citrus world, like a super-sized grapefruit. I love buying them at this time of year, and usually I can only find the ‘white’ variety, which is pale yellow inside. (You can find them at Asian grocers and markets.) This year I’ve had my hands on pink ones, which taste the same, but win with prettiness.

Once you break through the thick layers of skin and membrane, pomelo is quite a sophisticated fruit. The segments break up into fragments that are gorgeous clusters of citrus globules. The flavour is not too sweet, and delicately bitter. It’s dry compared to an orange, so it behaves brilliantly in a salad, not leaking with so much juice.

My daughter and I have branched into just eating a pomelo as you might an orange (as opposed to making salad with it). It’s a fun activity when you’re not in a rush! You cut off the peel and then prise the pomelo open, then start prising the flesh from the membranes (which are bitter and inedible). It’s quite easy to do, but it takes a little while to work your way around. Like the fruit version of devouring a crab! Juice and debris littered all over the table.

Here’s my version of Vietnamese pomelo salad. We ate this in Vietnam and I’ve been making and tweaking it since. It’s often made with crab, but we like it with squid (our go-to seafood that’s easy and cheap). The differences between my version and an authentic version is that there’d usually only be peanuts or sesame seeds (or coconut), not both – but I like the combo for added flavour and crunch. There would also be much more dressing (lots more sugar, fish sauce and lime juice), but this amount tastes right to me. You could serve it with sticky rice or coconut rice, or with Vietnamese rice crackers. It makes a great light lunch or entrée. 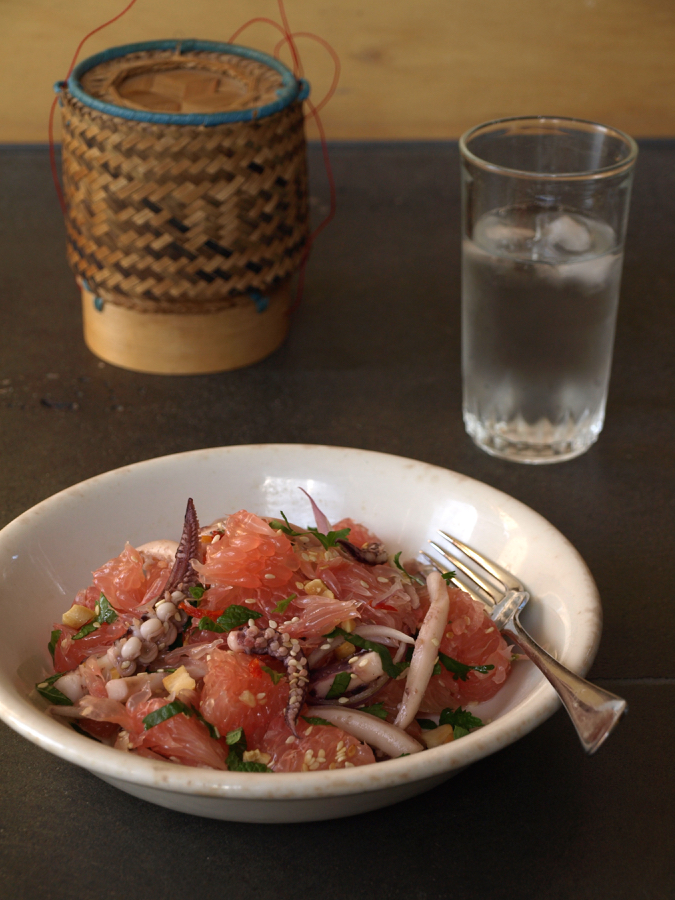 Take a good grip of the squid tentacles close to the body and pull away – ideally most of the insides should come too. Cut off the tentacles just above where they join together and set aside, discarding the head and insides. Slice the body through to the middle and open up. Pull out the remaining insides, and also the long plastic-like strip of cartilage. Slice off the wings. Wash the wings, body and tentacles.

Separate the tentacles into individual pieces with a knife, then cut into lengths of about 5 cm. Peel the purplish skin from the body and wings by getting your fingers underneath and gently pulling it away. Don’t worry if a little skin remains (it remains on the tentacles anyway). Cut the body in half lengthwise and finely slice each half into short linguine-like strands. Finely slice the wings.

Heat the oil over high heat in a wok or frying pan and add the squid. Stir-fry for a few minutes until opaque. Transfer to a small bowl with any remaining juices and set aside.

Cut off the top and bottom of the pomelo, then slice off the skin around the fruit. Cut the pomelo in half through the centre column of pith. Start prising the flesh out of the membranes in fragments, working through segment after segment. Drop the pomelo fragments into a large bowl as you go.

Add the squid and its juices to the pomelo, along with all the remaining ingredients. Toss well and taste for sugar, adding more if needed. The flavour should be a balance of salty, tart and sweet.