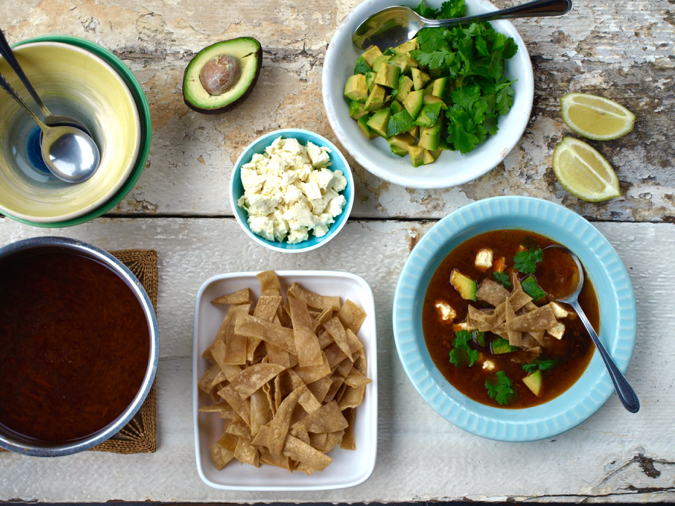 There are so many reasons to love this soup, and so many ways you could describe it. You could talk about the warm and fruity dried pasilla chillies that give the soup its brick-red colour, or the charred tomatoes, onion and garlic that are another big part of its flavour. And then there are the cubes of avocado that go on top, and the fried tortilla strips and the crumbled queso fresco cheese (sooo delicious, if you can get your hands on it). But before all these elements are added, it actually boils down to being a version of chicken soup and one you could definitely turn to when you’ve got a cold – I would say it’s even more worthy (and more exciting) than your standard variety as it has also has tomatoes for vitamin C. It’s a phenomenal soup whichever way you look at it.

Living in a decidedly non-Mexican part of the world (despite some amazing new restaurants popping up in Melbourne of late, and the gem that is La Tortilleria, whose tortillas are the best), the idea of putting fried tortillas in a soup first seemed foreign and novelty to me, but that didn’t stop me wanting to cook it the second I came across the recipe while working as an editor on the first Food Safari book. The thought stuck with me, although it took a while to gather the two unusual ingredients called for (dried pasilla chillies and queso fresco cheese). Turns out you can get both at Casa Iberica if you live in Melbourne, and the queso fresco is even Australian made – who knew!? If you don’t live in a city, then you could order the chillies online, and use a substitute for the cheese …

Queso fresco is a mild but definitely not flavourless cheese with a springy texture, and it melts into strings. I would say it probably has more in common with mozzarella than ricotta or feta (even though some recipes say to use feta). The last time I went to Casa Iberica they didn’t have queso fresco so I bought a similar-looking, small-wheeled cheese they recommended that was just called ‘formaggio’ and it did the trick nicely. You might have to get creative and make do with the nearest thing available, depending where you live.

There are different versions of tortilla soup of course, and other possible toppings include shredded chicken, diced or sliced red onion, crema (try sour cream thinned with a little milk) and lime juice. But in my house we love it just like this – no chicken (but homemade chicken stock). 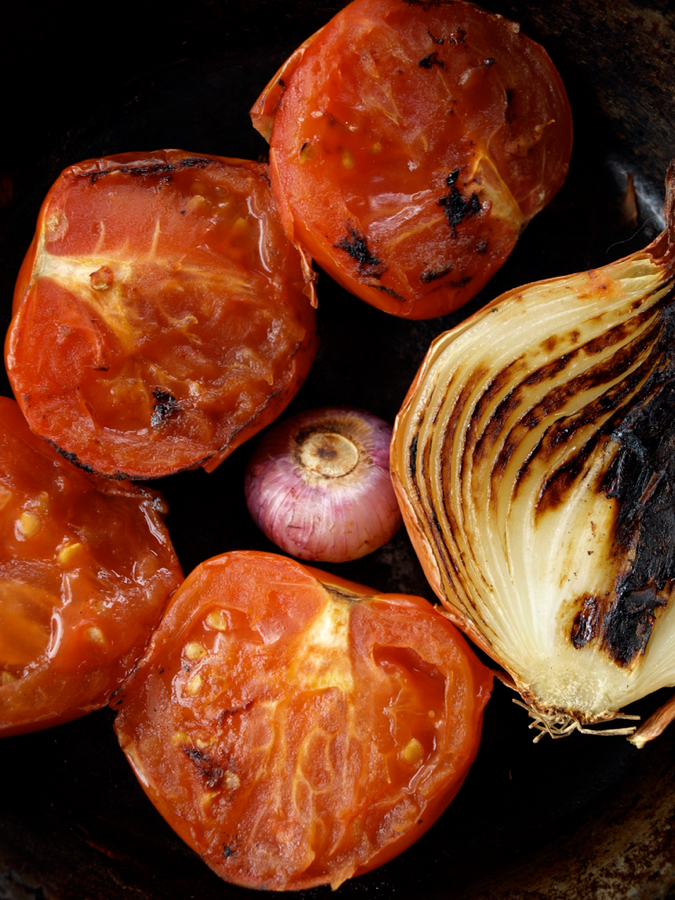 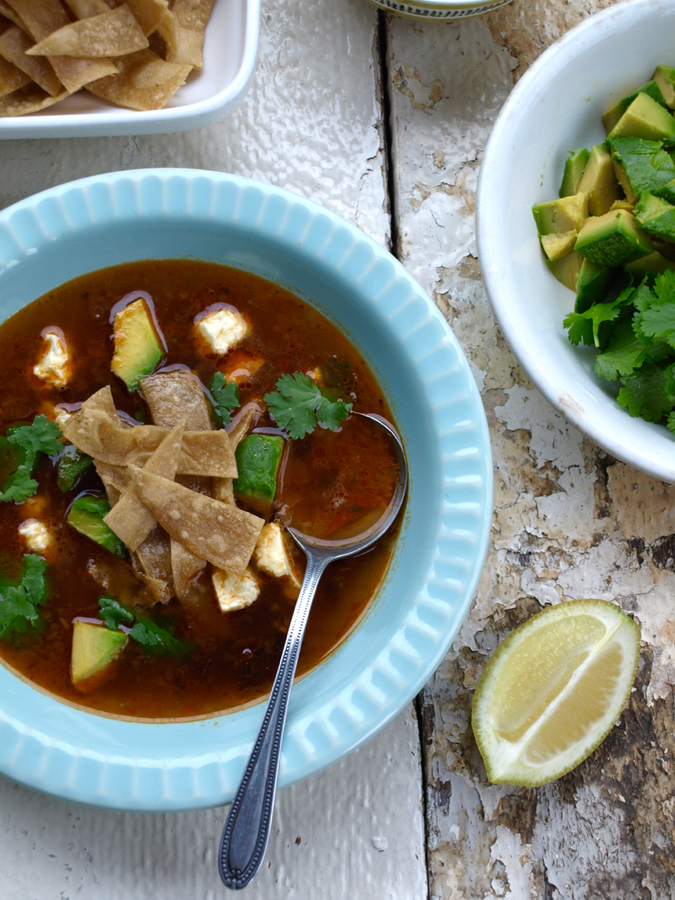 Warning – if this is dinner and you are hungry then you might still feel wanting at the end of the soup, because it’s light. Have something else on this side, or do as we sometimes do and whip up a fast dessert like Spanish-style rice pudding!

1 large dried pasilla chilli (or 2 smaller ones)
2 tomatoes, halved
½ onion
2 garlic cloves
oil for shallow-frying
8–10 corn tortillas, cut in half, then in strips
1 litre chicken stock (I use light homemade stock leftover from poaching a chicken; if you are vegetarian, I think you could use vegetable stock)
salt
100–150 g queso fresco cheese (or a substitute, see above)
1–2 avocados, diced
¼ bunch coriander (cilantro), leaves picked
lime or lemon (optional)

Heat a small frying pan over low–medium heat. Wash the chilli, then put it into the pan and dry-roast it briefly, turning, until fragrant but not charred. Put the chilli into a bowl and cover with hot water, leaving it to soften for 20–30 minutes.

Meanwhile, put the halved tomatoes, unpeeled half onion and unpeeled garlic into the pan. Cook for around 8 minutes on each side, until charred and softened (you might need to remove the garlic before the tomato and onion).

Heat a shallow layer of oil in a frying pan (or even better, use a wok) and add a handful of the tortilla strips. Fry, turning, until lightly golden and crisp (it only takes a minute or so). Drain on paper towel while you continue frying the remaining tortilla strips.

Peel the charred onion and garlic and put into a small food processor or blender with the tomato. Remove the seeds from the softened chilli and add it to the processor. Puree the mixture.

Put a tablespoon of oil from frying the tortillas into a saucepan. Place over medium heat and add the tomato puree. Fry, stirring, for a few minutes, then add the stock. Simmer for 10 minutes. Season to taste (depending on how salty your stock is).

Ladle into bowls and serve with the fried tortilla strips, cheese, avocado, coriander and lime or lemon to add to your soup at the table.