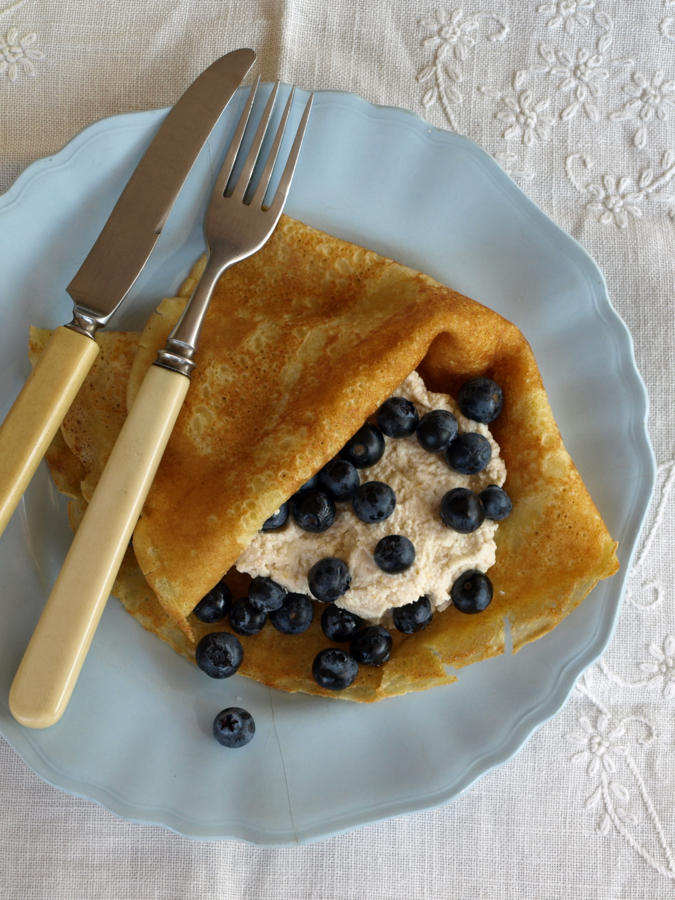 I have a friend who is fanatical about poaching eggs on the weekend. He has it down to an art form not using any mod cons like electric egg poachers (!) or cheating with plastic wrap (!!), but sometimes the eggs themselves conspire against him and don’t want to be poached in that pleasing neat sphere. Ah well, still he enjoys his eggs over the morning paper, then feels ready to get on with the rest of his weekend.

Making pancakes is my thing – it’s a box that needs to be ticked each weekend, a moment of slowing down and taking it easy that makes me feel like all is well with the world again after another busy week. Of course it’s also about enjoying something different for breakfast other than the usual run of weekday porridge, muesli and cereal that we scoff down in a hurry. I have a few different pancake and crepe recipes I rotate, and my husband has a few of his own too, although I have to say I hog the spotlight in this department, such is my enjoyment in the trio that is a bowl of batter, a frying pan and me!

It doesn’t seem to matter which pancakes are on the menu, our kids inhale them. Sometimes their appetites are so gigantic that I’m not left with many pancakes myself – but I don’t mind. It’s the making of the pancakes that’s important.

I think there are two main pancake camps in the world. There is the American style: those soft, pillowy cakes that are sometimes called hotcakes. This is the type that pours out of one of those shake-a-pancake bottles, which supposedly takes the hard work out of pancakes!? It’s also the type you find at the restaurant with the golden arches. The simple homemade version of them is easily whipped up with a batter of self-raising flour, egg and milk, which I think is perfect for making pikelets.

But the second pancake camp is oh so superior I think – the main differences are that these pancakes don’t use self-raising flour, but plain; the batter is thinner; and it’s spread thinner again in the pan. These decidedly more elegant, European-style pancakes are more satisfying to rip, with a slight bread-like stretch and resistance, and with a little more chew to them, but they are not heavy at all, despite what you might think. This pancake camp is where you’ll find me!

Once we were invited for a little lunchtime gathering at our old Hungarian neighbour’s house and the occasion is memorable because of a lady we met called Rosa. She was everyone’s favourite baker it seemed and arrived with a picturesque caramel-topped dobos torte, as well as a stack of large pancakes rolled up with jam. These somehow excited and inspired me much more than the many-layered torte as they seemed like such a beautiful yet simple offering. We ended up taking several home and they were totally delicious. 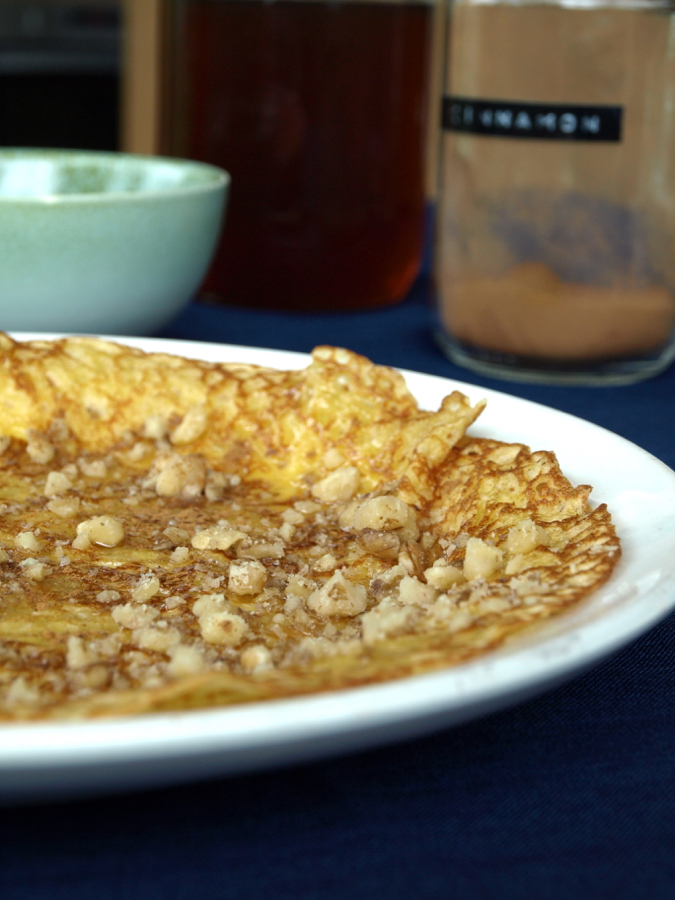 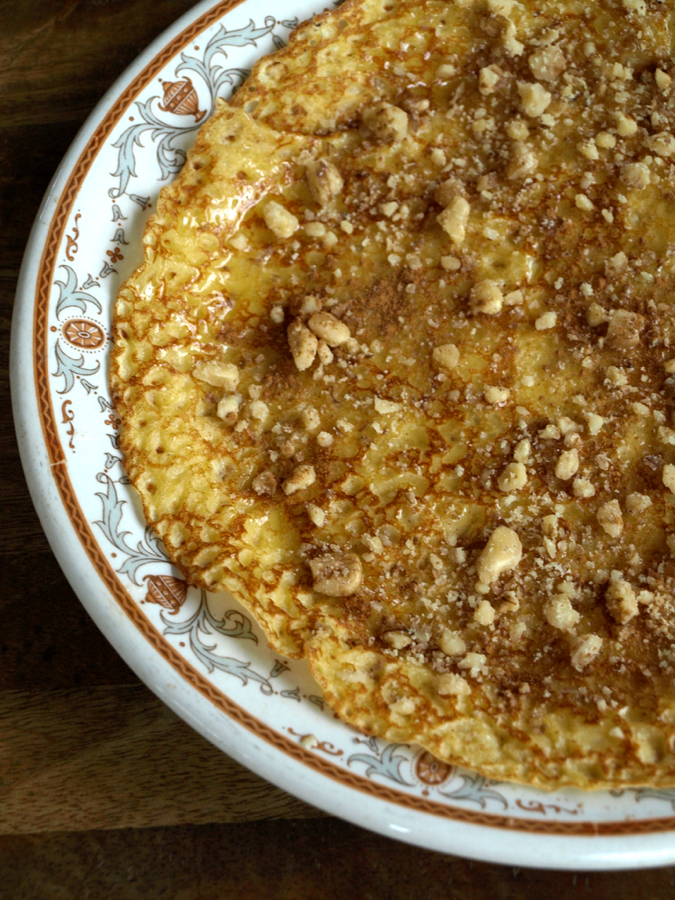 Like Rosa, I make wide pancakes that stretch to the edges of the pan. You could probably call them crepes. But I keep that word for when I make French-style buckwheat crepes, while anything with wheat flour (always some wholemeal in my kitchen) is a pancake. To go with the recipe are two favourite toppings as alternatives to the usual honey/jam/lemon and sugar if you were ever after one.

If making pancakes with the walnut topping, crush the walnuts in a mortar to give chunky crumbs. (As walnuts are soft it only takes a few minutes, but alternatively you could use a small food processor.)

For the ricotta and blueberry topping, combine the ricotta, sugar, orange zest and cinnamon in a bowl and mix well, thinning out with some milk if needed.

To make the pancake batter, tip the flours and salt into a bowl and crack in the eggs. Add a splash of milk and whisk until smooth without lumps, then whisk in the rest of the milk.

Heat up a frying pan over medium heat. Once hot, add a knob of butter, swirl it around, and pour a small ladleful of batter into the centre of the pan. Swirl the pan around so the batter spreads out toward the edge of the pan to make a wide pancake. After a minute flip the pancake, which should be lovely and golden, and cook for another 30 seconds on the other side. Transfer to a plate and keep cooking pancakes with a small knob of butter each time.

One thought on “Two favourite pancakes”