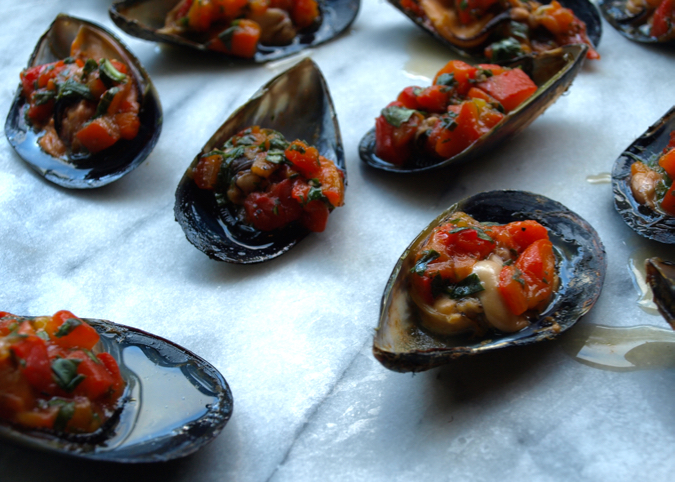 Why open a mussel raw when you can cook it via steam and it will open itself? Because mussels grilled on a barbecue, cooked gently from heat beneath their shells, are INCREDIBLE! They’re rendered so delicate and soft, without any of the tightening that goes on when they’re steamed, and you would swear you were eating something extraordinarily rare and expensive, not something you buy for under $10 a kilo. So we – my husband and I – put up with the slightly time-consuming task of prising them open again and again. (My husband is a champion at it and doesn’t seem to mind the job, so sometimes I leave him to it!)

You may start to see (as I do) that an opened raw mussel is a blank canvas that could be topped with any number of flavours and ingredients. And yet while I think this, I’ve never tried anything else but this roasted capsicum topping, as it is so good!

This has graced our Christmas table before, and is going to make an appearance again this year. We’re hosting Christmas for my family – and it’s the first time we’ve hosted in our current house even though we’ve been living here 8 years. Mostly I want to make this for my mussel-loving sister (she’s makes a fine pair with my mussel-loving 7-year-old daughter, who ate 12 mussels last time I made these!)

This is also a great recipe for summer barbecues. It was published in Inside Out magazine in a spread of Christmas recipes I wrote in 2010, and I’ve decided its high time they start coming across to join the family 🙂 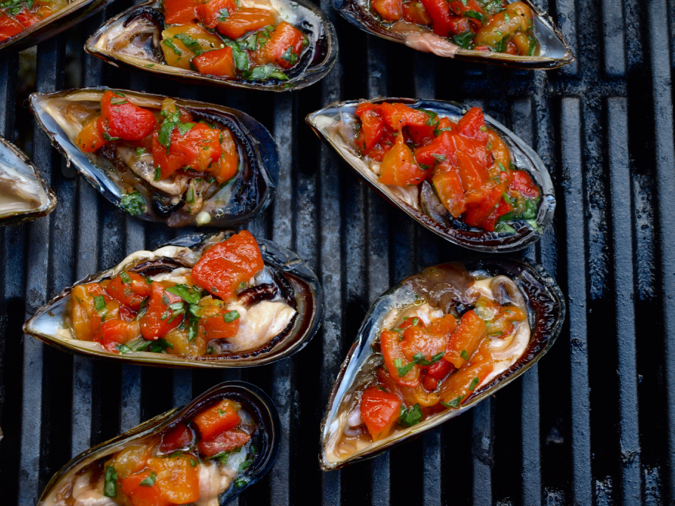 Roast the capsicums in a 200°C oven for 30–40 minutes, turning every so often, until blackened and soft. Remove from the oven and cover with an upturned bowl to allow the capsicums to steam to help loosen their skins. When cool, peel the capsicums and remove the seeds. (You can do this a day or more in advance and store in the refrigerator.)

Finely chop the capsicums and place in a bowl. Chop the basil and add to the capsicums along with a generous splash of oil and a squeeze of lemon juice to taste. Season with salt and pepper.

Wash the mussels and pull away the beards. Set up a chopping board over your sink to catch the juices. Take one mussel and insert the tip of a heavy knife towards the hinge end. Force it in a little, then use your free hand to push the knife down and through the hinge, then move right around the mussel until the shells separate. By doing this it is hard to avoid slicing the mussel meat in half, but don’t worry; simply pull the meat from the least perfect shell and place on top of the meat in the other shell. Try to retain at least some of the mussel liquor in the shell if you can. Place the mussel on a tray and continue cutting open the other mussels.

Add a teaspoon or so of capsicum salsa to each mussel. Sprinkle with smoked paprika. Grill on a hot barbecue for 4–5 minutes. The liquid in the shells will begin to sizzle and the mussels will pull away from their shells. Remove from the barbecue when the mussels are opaque and the juices have reduced a little. Enjoy immediately.